Astrogator in STK and the Segment Propagation Library (SPL) Components are trajectory design tools that capture the imagination (or they capture mine at least). From fumbling with Astrogator in college, to writing parts of SPL, to using both for actual missions, it still amazes me the potential and power these tools have. Every step along the way I realized that they could be used in more and more places and discovered truths both subtle and obvious about how these tools can answer questions I never would have thought they could. The biggest of those steps was when I looked at Astrogator from the point of view of a software developer and considered the lessons from that discipline with trajectory design.

In writing software, one concept that I learned was that anything is possible if you are willing to write enough code for it. Later ideas, like making each chunk of code responsible for one thing and trying to automate as much as possible, caused me to start scripting up as much as I could when working with STK in general, and Astrogator especially. Working with these tools while developing other applications made me realize that Astrogator and SPL have much more depth and potential than just planning maneuvers. 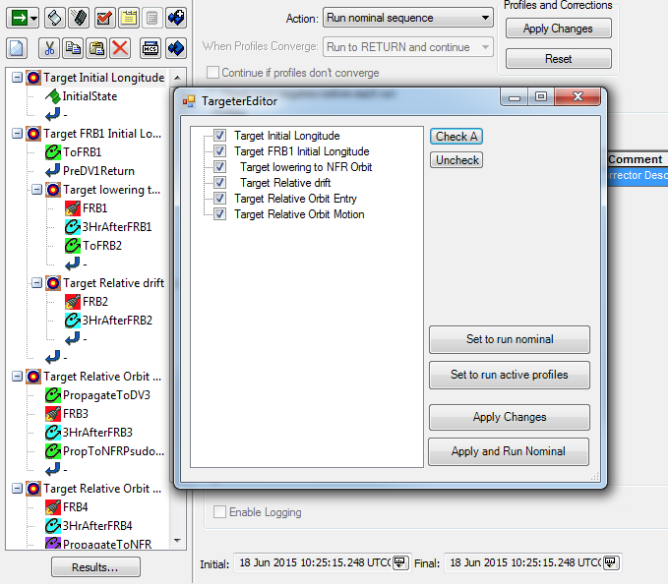 That has led my team to do some amazing things; some crazy, some simple, but all useful. From putting hundreds of stopping conditions in a propagate segment to a simple UI plugin to apply/reset all my target segments, an amazing amount of power is unleashed once you start writing code to do the work for you. Once you realize you can leverage other parts of STK and Components in ways that the normal GUI wouldn’t let you do, you can quickly whip up a multithreaded analysis program to answer the question ‘what happens if the engine of my spacecraft dies as I try to dock with a target?’. Every day I find another use for propagating satellites with segments.

As similar as Astrogator and SPL are, I’ve also found that often one is a better tool for a given task than the other. If you want to put 900+ stopping conditions in a propagate segment, SPL scales very well. When you want the intuition of seeing your trajectory, Astrogator is your tool of choice. But knowing both tools and picking the right one for the job is critical. During this webinar, I’ll show several tools I’ve worked on where SPL or Astrogator were used to very good effect.

Please join us for our upcoming webinar, 26 July 4:00 EDT, where these topics will be explored.