Finding the ideal locations for radars to provide persistent surveillance for a region,becomes a difficult task when the terrain is complex. Other factors that add to the complexity are height constraints, line-of-sight constraints, no-go regions etc. STK, using its gradient-based optimization algorithms, helps to locate the optimal positions for the radars. In the figure below, the magenta area shows the coverage region 3km above the terrain and the green region shows where the radars can be deployed. In this case, the radar deployment region is rectangular; hence, the optimization problem can be easily set up in Analyzer by providing the extends of latitude and longitude as the independent variable and setting the optimization objective as the percentage of Area Covered. The gradient-based algorithm can be used here. The search space for the radars will be always within the rectangular region. 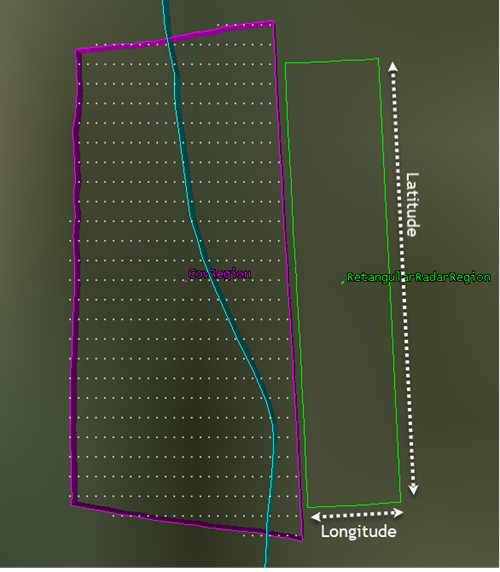 However, if the deployment region is non-rectangular, as shown in the figure below, and if latitude-longitude extends are used to define the search space, then there will be a totally unnecessary region (shown in red), which will be searched by the optimization algorithm. 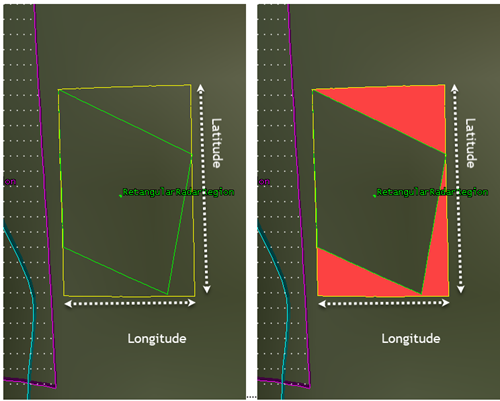 In order to restrain the search space within the green region, we propose a genetic algorithm-based optimization. To set up this in Analyzer, first create a coverage definition object on the radar deployment area target. Create a report that contains the latitude, longitude location of the points of the coverage definition. The points can be made coarser or finer as required by changing the point granularity. The genetic algorithm will search in this points cloud to determine the optimal location.

Setting up a genetic algorithm to search in these points requires a customized setup in Analyzer with macros. Here are the steps:

In the figure below, the Magenta region shows the coverage region and the green (non-rectangular) region shows where the radars have to be deployed

An Optimization run with the Darwin Algorithm was carried out with one, two, three, and four radars. The radars have been given a maximum line-of sight visibility of 15km. The results are given below.

It can be noted that deploying three and four radars have not provided significant improvement in coverage. Hence, it can be concluded that in this case two radars would suffice the requirement to provide optimal coverage for the magenta region.

The image below shows the maximum coverage obtained with two radars and their optimal locations. 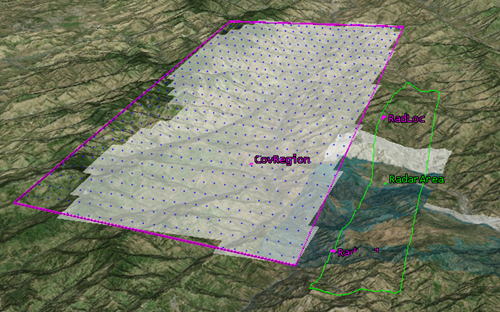