More power to you

Have you ever needed to model a transmitter or receiver that changes dynamically in STK?

Well now you can!

Plugin scripts in STK are a powerful tool. They allow users the ability to extend and customize their analyses with nearly no limits. Click  power_adaptation.vdf to download the Power_Adaptation scenario, which is a great example of using a plugin script to extend the capability of STK. 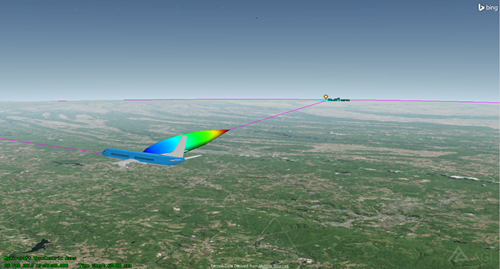 The scenario contains an aircraft that is transmitting to a receiver on the ground. Using a plugin script written in MATLAB, the transmitter dynamically controls its power to maintain an exact, predefined Signal-to-Noise ratio (Eb/No) at the receiver.

To see this in action, you can first run the MATLAB script titled “Power_Adaptation_Initial_Script.m” found in the scenario file. This script attaches to the scenario and saves the Eb/No Link Margin values from the transmitter “SampleXmtr” to the receiver “MyRcvr” as a .mat file.

Next run a Link Budget from the transmitter “MyXmtr” to “MyRcvr”. “MyXmtr” is defined from plugin script. The script can be found in the file as “My_Transmitter_Model.m”. At every time step the plugin script loads the Link Margin values from the .mat file, interpolates, and adjusts the power accordingly. And Voila! Perfect power control.

Of course, this analysis could be extended further. A time delay or control law can be introduced in the plugin script for a more realistic model. Feel free to play around with the possibilities, and explore the power of plugin scripts!