STK allows you to compute a wide range of analysis and export those results in a variety of ways, such as reports, graphs, videos, images etc. In addition, the open architecture of STK enables you to customize or extend your analysis to meet your specific project’s needs.

In this blog, I’m going to focus on how to customize a simple analysis available in STK using a custom script. If I said, "Solar Power analysis," you’d immediately think about the Solar Panel tool, and then I’d say, "yes, but what if your equations are slightly different?"

That's where the scalar calculation script comes in handy.  The following Scalar Calculation script example shows the Type as Custom Script, the CalcScalar Script File as PowerGenerated.vbs, and Dimension as Power. 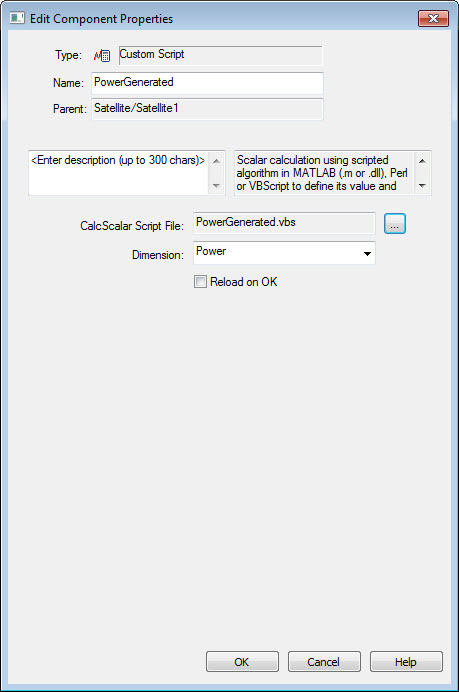 Your script can be written in MATLAB, VBScript or Perl. To make your script available in STK, you must save it to:

Once your script is available in STK, you can use it to generate custom reports and graphs or export the computed results.

For an example scenario that includes a custom scalar VBScript (PowerGenerated.vbs), see this  FAQ.