Summer's here. But why? And will Earth's clocks continue to provide Sun time? 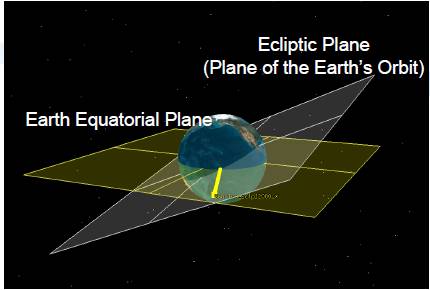 Summer is here. Why? Because the Earth’s axis is tilted (about 23.5 degrees relative to the Earth’s orbital plane). If the Earth’s axis were not tilted, day and night would be the same length all of the time. There are two points in the Earth’s orbit about the Sun at which day and night are equal, when the Sun is along the line of intersection of the Earth’s equatorial plane (the ecliptic) and the plane of the Earth’s orbit. The line of intersection is often (not always) called the equinox, and the events of equal day and night are called the autumnal and vernal equinoxes. Through celestial coincidence, the equinox line was directed at the first point of Aries when day and night were equal during the transition from winter to spring. Since the concept was accepted, this point has moved into Pisces because the Earth’s tilt and orbit change slowly but continuously. The line through the center of the Earth perpendicular to the equinox line in the ecliptic plane defines when the northern hemisphere is most illuminated by the Sun. This is the longest period of daylight, the summer solstice. We in the Northern Hemisphere have just been there. For more about this and how it affects how we keep time, see the recently published article from the July/August 2011 edition of American Scientist, “The Future of Time: UTC and the Leap Second.”