Jupyter Notebooks and Python in STK

Do you want to use integration to automate STK? Do you have limited desktop space, or would you just like to write your code and see STK without switching applications?  Python and Jupyter are here to save the day!

Jupyter Notebooks are a web application that can contain live code, plotting and HTML.  This allows for STK to be controlled from within using the built in HTML viewer.  Jupyter notebooks can be installed many different ways, the suggested install that we use is the anaconda download from Continuum.

Having the power to code while in STK is extremely powerful since the Object Model workflow follows the workflow of the STK GUI.  Jupyter also allows for the creation of full HTML formatting and the creation of widgets such as buttons, drop down menus, stereo buttons, and much more.  This allows you to even create a custom interface for the user to see when they open the Jupyter notebook inside of STK.  Below is a screen shot of the jupyter notebook open inside of Desktop STK.  It has a button that when clicked will create a satellite.  This is just a glimpse into the power behind jupyter notebooks and python. 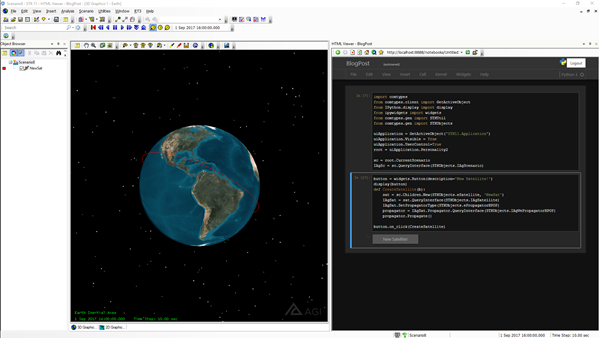