In STK 11.6, we bring a new layer of 3D content to your globes.  With this release, we are rolling out support for the OGC Community Standard, 3D Tiles, a specification that is designed to optimally stream massive 3D datasets into a scene. 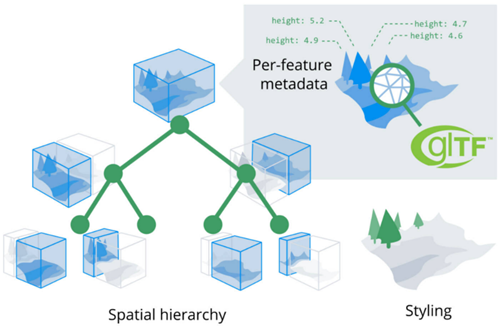 To use 3D Tiles, you need to think big! Massive CAD models, entire cities defined in CityGML, or massive models at centimeter resolution built from photogrammetry, are just a few examples of source data well suited for 3D Tiles.  A 3D Tileset is easily created by sending your source data through a 3d-tiler, such as Cesium ion or the on-premises Geospatial Content Server.

Processing and hosting a 3D Tileset brings the benefit of enterprise level, curated globe content that can now be easily added to any STK or Cesium environment within your organization for visualization purposes.  STK users operating in a serverless environment, or those with offline access to 3D Tiles content from other 3DTile providers, can  load tilesets that reside on the local disk.  See the newly added AGI_Headquarters sample that ships with STK (shown below) for an example of this.

Animation showing the new AGI_Headquarters sample 3DTileset. This tileset was generated from a photogrammetry model capture.

Along the way, we’ve also made a number of improvements to our glTF models.  In adding support for 3DTile formats, we gave glTF a bit of a boost as it is the most common payload found in 3D Tilesets.  This includes support for the following new glTF extensions:

Finally, we also made significant improvements to the default lighting environment for glTF models.  In 11.6, you’ll notice richer contrast and improved response from external light sources, such as the flashlight.

Animation above shows changes to the default environment lighting, comparing STK 11.5 to STK 11.6.