GPS basics and beyond

Ever wonder how your phone always knows its location? Today, each smart phone  has a no kidding GPS receiver embedded within, and with that it has the ability to receive satellite positioning signals at all times. In fact, you don’t even need cellular service to gain a position using GPS, it’s totally independent. Go ahead and try it!

Here’s how it works

The basic idea of GPS (Global Positioning System) is to take distance measurements between the GPS antenna (like the one on your phone) and four or more satellites. Typically, we call this a range measurement and it is typically in meters or kilometers. The range is estimated by comparing the arrival time of coded timing signals to the clock on the GPS receiver. So really it’s a delta time measurement, but for historical reasons, it is expressed as a distance.

Since it’s based on the receiver's clock, all the measurements will be biased by the error in the GPS receiver’s clock, and this can be a very large error since most receivers have simple crystal oscillators for timekeeping. The range measurements can even be negative if the clock is ahead by enough.

If we have the range measurements to four satellites and we know the position of each satellite, we have 4 measurements and 4 unknowns (the X, Y, Z position in earth centered earth fixed (ECEF) and the delta time error of the receiver clock. Continuously solving for these equations is how your phone can resolve its position! With a total of 32 GPS satellites orbiting the earth, your phone’s receiver pretty much always has access to at least 4. And this is just the beginning! Your phone has access to other GNSS (Global Navigation Satellite Systems) from other countries as well. The basics of GPS get pretty complicated, pretty quickly, so I like to use Systems Tool Kit (STK) from basic to advanced visual and numerical analysis.

With STK, you can define any number of systems that rely on GNSS while accounting for time and geometrical dependencies. In figure 1, the airliner is fitted with a 25 element phased array antenna, set to track all GPS satellites within its line of sight. The graph then shows us the corresponding position resolution in meters throughout the airliner's flight. The positional accuracy fluctuates from below 5 m, to over 100 m at times. The more satellites the aircraft can access, the better the GPS resolution, but as you can see, its flight profile, scenario timeframe, and satellite locations all play into the overall result. We can also gain graphical awareness of the phased array antennas gain contours in 3D, red being the lowest and blue indicating the highest gain value on the aircraft (right side of figure 1).

And this is just the beginning. We can define a similar system seen in the first example, and extend the model to include passive or active interference objects, allowing us to gauge overall effects on our GNSS dependent system. You can even go so far as to include atmospheric effects on system performance. 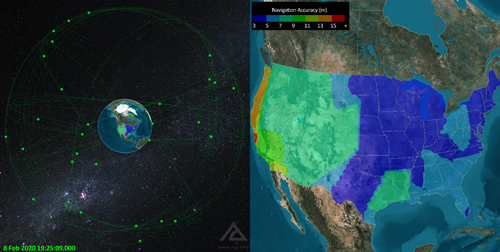 Let’s take a look at a higher level example. Figure 2 shows the average navigational accuracy over the entire US, on Feb 8th, 2020. An analysis like this takes just minutes to generate and accurately models the GPS constellation orbit properties given our selected date. Figure 2 shows our average navacc at a given instant, but analysis can be adjusted to show our average over any length of time.

Space-based navigation systems like GPS are an integral part of our everyday lives. Whether it’s simple google maps navigation, or high profile mission design and analysis, having the ability to gain awareness no matter the application is an indispensable skillset. To dive deeper into the world of GNSS, I recommend taking advantage of AGI’s free instructional library using STK. With it you can weaponize yourself as a navigational expert!