GEO Satellites don’t decay in 38 years, do they?

Depending on whether you think of GEO as geostationary or geosynchronous, you might think that the obvious answer to the title of this post is a firm “no.” Because if you think of GEOs as orbits near the equator with a small inclination, then no, your satellite will not be decaying within 40 years or anytime soon for that matter. But if you allow your definition of GEO to encompass any geosynchronous orbit, and such an orbit happens to be within about 15 degrees of the critical inclinations, your satellite may be reentering a lot sooner than expected.

Systems Tool Kit (STK) has a tool — called the Lifetime Tool — that you can use to predict orbital lifetimes. An evaluation of a GEO orbit is shown below. You can see that the Lifetime tool predicted it would decay in 38 years. To confirm this seemingly strange behavior, I used STK’s High Precision Orbit Propagator (HPOP) to verify this result. HPOP modeled that it actually took 68 years for the satellite to reenter, but there was a near reentry at the 38-year mark — just as the Lifetime tool predicted.

This “early reentry” phenomenon is not specific to GEOs. It can occur to most orbit regimes above LEO. Below you can see a plot of the lifetime predictions versus inclination for randomized orbits with radii between 10,000 km and 44,000 km. Only the orbits that decayed within 100 years are plotted. The plot shows that all of the orbits that decayed were near the two critical inclinations of 63.4 and 116.6 ± 14 degrees. 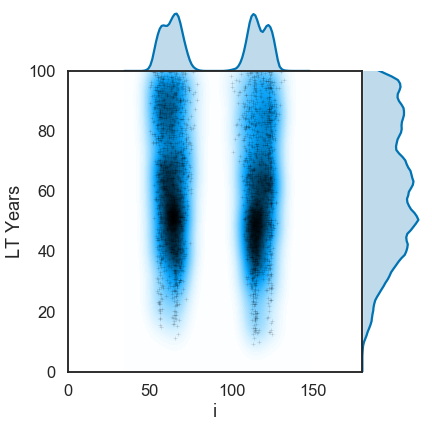 At these critical inclinations the satellite’s perigee location doesn’t experience much drift, due to Earth’s oblateness. This leads to a stability in orbit orientation. Because of this stability, a situation can arise in which the satellite is pulled by the Moon and Sun more strongly on one side of the orbit than on the other. These perturbations will cause the eccentricity to grow even as the satellite maintains the same orbital energy. That is, until the perigee gets pulled into the Earth…

If you’re anything like me, you may be thinking “if some of these orbits are decaying, how common is this?” The plot below addresses this question by using satellites at various altitudes, but within about 5 degrees of the 63.4 deg critical inclination. 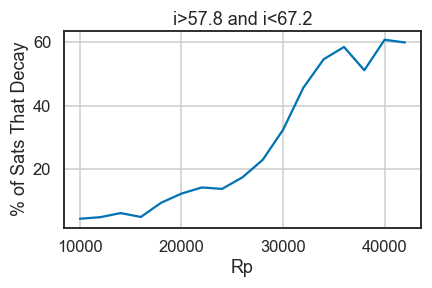 Surprisingly, as the periapsis radius increases so does the chance of decaying! About 50% of orbits with a radius of periapsis greater than 35,000 km end up decaying in less than 100 years. This led me to wonder, “could this orbit regime be used as an end of life decay orbit?”

Typically, GEOs are disposed of by moving them into super synchronous orbits. This approach takes about 10 meters per second of Delta V. But this leaves the satellite in orbit nearly indefinitely. To deorbit a GEO by lowering the satellite’s perigee into Earth’s atmosphere, you need a much larger Delta V of about 1,480 meters per second. This amount of Delta V could also be used for an inclination change of up to 28 degrees. If a complete deorbit was preferable, it may be cheaper for a geosynchronous satellite with an inclination above 30 degrees to raise its inclination and let the orbit naturally decay, rather than to do a large altitude lowering maneuver. This is not practical for the majority of GEOs and there is collision risk whenever a defunct satellite’s orbit naturally decays. But for a few unique missions, this could make sense. For a mission in an orbit similar to Japan’s QZSS satellites — which are at an inclination of 43 degrees — it would take 530 meters per second of Delta V to raise the inclination by 10 degrees. That might just be enough to allow the orbit to decay naturally with a hundred years. This is still a much higher Delta V than would be required to move the satellite to a super synchronous orbit, but it would offer the benefit of removing space debris.

For more information on this GEO example, orbital lifetime predictions in general, and how to set up your own large-scale orbital lifetime analysis, check out this code example on our GitHub.