High frequency (HF) propagation is special in that it enables signal reception beyond line of sight (BLOS), or, over-the-horizon (OTH), which enables you to transmit to locations that are obstructed or separated by extremely long distances. HF is therefore considered a global transmission mechanism.

When it was first developed, OTH HF propagation became a very important transmission mechanism for communications to remote regions of the world. In the 1950s and 1960s it was introduced into radars, enabling threat detection at very great distances. However, the proliferation of satellites introduced a new method to achieve global coverage for both communications and threat detection. Satellite systems hold a long list of advantages over OTH assets — e.g., higher frequencies, higher data rates, improved detection — and soon HF OTH communications and radar were eclipsed by the satellite-borne alternative.

But, in the past few years I have seen more and more customers asking if STK is capable of modeling in the High Frequency band and particularly OTH propagation scenarios. This renewed interest can be attributed to several factors, including advances in higher order modulations, better forward error correction, automatic link establishment, ease of satellite counter-measures, and faster and smaller long-distance threats.

STK 12.1 introduces an HF propagation model called VOACAP, which stands for Voice of America Communication and Analysis Prediction. VOACAP is a slightly modified version of IONCAP (Ionospheric Communication and Analysis Prediction), which is a prediction program developed by numerous groups and organizations over the course of many years. Tens of thousands of ionosonde measurements were taken all over the world, over several solar cycles. These measurements are used to populate the model with a representation of the ionosphere, enabling the model to derive electron density profiles that are used in propagation path predictions. The model has a strong following within the open communities and is probably the most widely used of its kind. While there are other, similar models, we selected VOACAP for its popularity, favorable references in scientific papers, fast computation speed, and its ability to be tightly integrated into STK. We removed the command line nature of execution, eliminated the file driven I/O processing, and turned it into a library that we can call directly in-process. 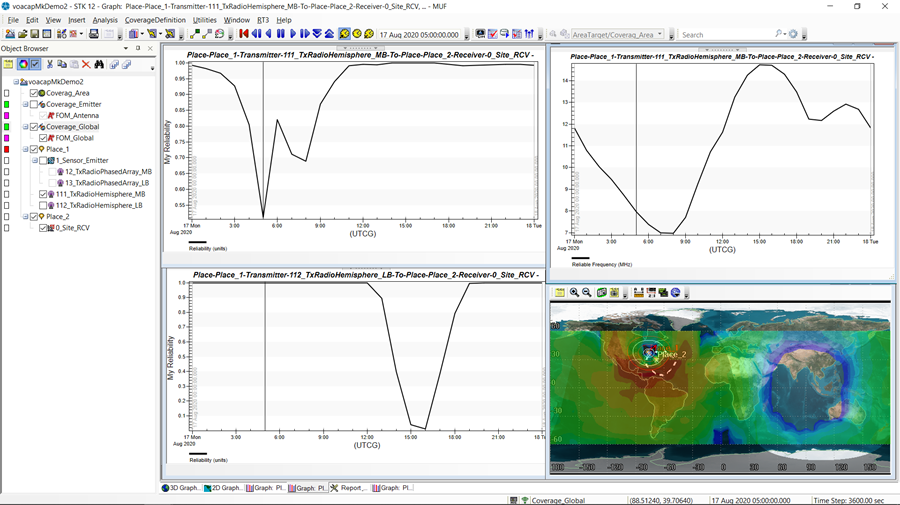 STK 12.1 and its integration of the VOACAP model can help you understand all the dynamics involved in HF skywave propagation. STK makes use of VOACAP’s propagation loss, maximum usable frequency, transmission angle, receive angle, and reliability. STK also enables you to see the entire system performance metrics computed by VOACAP.  Here are some of the problems you can investigate with STK’s dynamic modeling capabilities and VOACAP:

Finally, if you want to see HF propagation and the VOACAP model in action, check out my recent webinar (20 minutes). And don't forget to visit the STK 12.1 page on our website and learn about all the other features and enhancements that come with STK 12.1.