What is space debris? We define it as an inactive body orbiting the Earth, such as a satellite at the end of its lifetime, a rocket body, or a small object jettisoned from a “parent” object, such as a payload firing.

A piece of space debris may or may not fall to Earth depending on the characteristics of its orbit. While a defunct geostationary satellite will stay in space forever, an object in a low Earth orbit (LEO) or a highly elliptical orbit (HEO) with a low perigee will reenter Earth’s atmosphere. This is good for the safety of the space environment because it won’t become a threat for other orbiting objects, but it does mean that the object could fall to Earth and pose some risk to the population. This risk raises the question: how do we determine where and when an object will reenter the Earth’s atmosphere, and what will happen when it does?

Estimating the location and epoch of an object’s reentry is dependent on several parameters that have some degree of uncertainty:

A possible solution is to run a stochastic model to recreate the same scenario by changing an element (e.g., the initial state or the cross-sectional area) accordingly with some normal distribution that represents our actual knowledge of the system. Automating the work with STK Integration is a great way to do that.

For example, I developed an app called the Reentry Calculator to plan deorbits, but you can also use it to assess the risk of unplanned reentries. We can perform multiple runs of a propagator— STK Astrogator, in this case— using the normally distributed values around the initial state, and eventually for the other parameters.

The picture below shows the calculator's user interface: 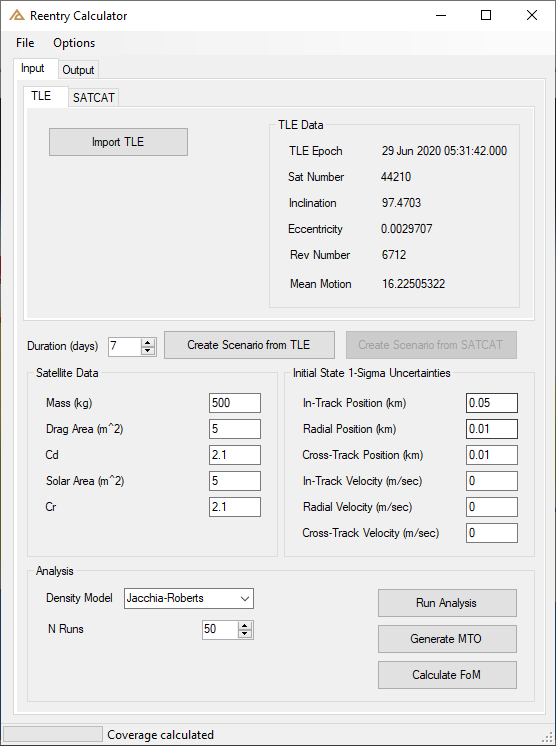 This tool accepts an input of the two-line element (TLE) of the decaying object and allows you to define uncertainty levels around its initial state and a specific density model. After filling in the physical data fields, you choose a specific number of runs. At each run, the initial state is changed slightly and, using Astrogator, the object is propagated until it reaches the ground.

The impact times and locations are collected and displayed as time components and target objects, respectively. At the end of the runs, the results are converted back into a statistical format of mean impact epoch and 1-sigma deviation.

STK shows the likelihood of the effective impact location by performing a coverage analysis against any of the resulting impact locations from the runs.