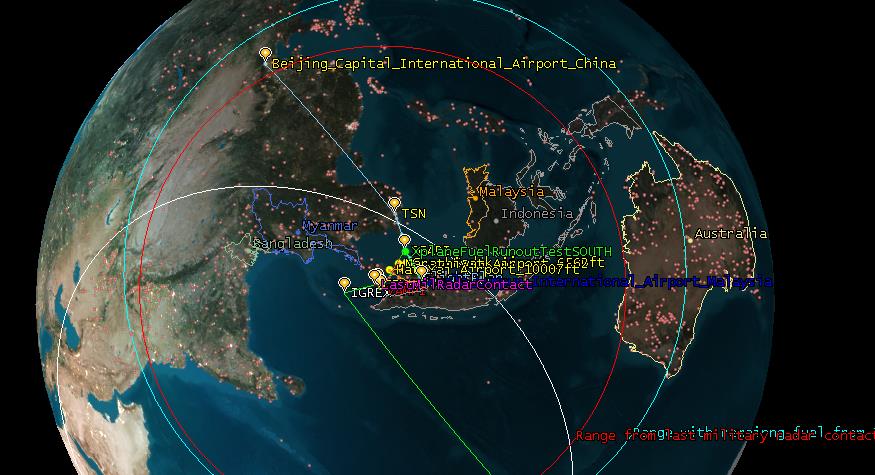 As the search for Malaysia Flight 370 continues, we've been using STK to create scenarios that can give us a better perspective of where all the assets are that are playing an integral part in piecing together the plane’s mysterious disappearance. If you watched the Smerconish show on CNN Monday night, you may have seen our friend and USGIF CEO Keith Masback discussing GEOINT's role in the search. The focus of Monday night's AGI animations were on Inmarsat versus Iridium satellites, but in terms of modeling space assets for a problem such as this, AGI software can be used to: Because we are Systems Tool Kit and not just Satellite Tool Kit, our software can also be used to:

The benefit of using modeling, simulation and analysis tools are to either turn up useful data on the aircraft's position and/or help eliminate certain paths and areas. This could help feed into progressive search approaches, such as Bayesian, which are updated based on new information. In particular, for an international search effort, the use of models and simulations can aid in collaboration to help optimize search resources. STK can be used to optimally schedule satellite sensor collections efforts across different types of satellites, orbits and sensor capability to achieve the best coverage. STK can do this tasking rapidly and dynamically to reallocate sensors when new information on higher probability areas is available. Finally, STK can perform aircraft fly-out modeling, and data such as flight simulator data can be brought into STK as “what if” scenarios to be run and analyzed in the STK environment. The software can be used to find: We have a created a notional scenario using open source information to model the flight path of Flight 370 and the search for it. You can find it on the STK Data Federate (username: anonymous). You can also check out a video of the scenario: