Years ago, I flew combat support missions in a country far, far away. After retiring, I continued training my comrades as a civilian contractor. People running the show always had one thing in common: SAVING MONEY! We used government furnished software and two dimensional maps of the combat zone, employing round plastic cutouts that mimicked surface-to-air missile (SAM) kill zones. During mission planning, we used grease pencils to draw circles around known SAM sites to visualize where ingressing friendly aircraft might get shot down. We placed our aircraft in an orbit, based on a best guess philosophy, which provided a high likelihood of jamming specific enemy communications. At times, this got us uncomfortably close to the bad guys and combat air patrol (CAP) aircraft were assigned as escorts. I wondered what would happen to us if they were outnumbered.

On 24 February 1991, my crew was ramping up for a mission. That’s the night during Desert Storm that British and American armored forces crossed the Iraq–Kuwait border and entered Iraq. We were supporting. During our intelligence briefing, we were informed that there was a very high probability that Saddam Hussein was going to unleash his remaining fighters on suicide missions to destroy all high valued airborne assets (HVAA) flying that night. I flew on a HVAA. Like I said earlier, I wondered what would happen to us if our CAP were outnumbered. I wasn’t feeling very confident of coming home that night. If only we had today’s version of STK to use during mission planning.

One issue with drawing a round circle around a known SAM site is it’s two dimensional. SAMs go up, not just out, and some of them are on mobile platforms. Also, many need time to arm themselves. Using STK Pro and a Sensor object, mission planners can create awesome situational awareness of the SAM’s arming and weapons engagement zones (WEZ), whether it’s static or mobile. My SAM has an effective altitude of 30 kilometers (km), a slant range of 35 km, and a minimum range of 7 km. I’ve depicted this in the 3D Graphics window using a complex conic sensor and range constraints. The small bubble inside the big bubble is the arming area. As you probably know, the maximum range has the least probability of a hit. Using range rings, I further enhance the situational awareness.

Using STK’s copy and paste technique, you can quickly place known SAM sites on your map until you have a complete enemy order of battle. It’s fast, easy, and extremely informative.

Ok, I know where the SAMs are located, so what’s that have to do with HAVAA placement and making it home tonight? Well, it’s nice to fly outside a WEZ when you’re big and slow. However, we needed to get within jamming distance of the bad guys which often got us uncomfortably close to their radars and fighters. That’s where STK’s Communications and Coverage modules and the Terrain Integrated Rough Earth Model (TIREM) come into play. Instead of taking an educated guess of where the aircraft “should” effectively jam enemy communications, building your system and the enemy’s system in STK can take a lot of the guesswork out of the picture allowing mission planners to put the plane exactly where it needs to be, which could add some breathing space and less pucker factor to the crew. STK Communications permits you to effectively build known communication systems, Coverage analyzes the portion of the link budget you’re interested in (e.g., Signal to Noise Ratio), and TIREM takes terrain into account and applies it to the overall analysis. Building the entire communication system, mission planners are able to analyze aircraft placement based on mission effectiveness. Keeping things simple, I’ve built an Area Target object around a target area. I’ve taken a receiver and applied it as a coverage constraint. Based on system limitations, STK analysis takes place inside a sensor’s field-of-view depicted by the heavy yellow line showing a ninety (90) degree wedge. To effectively jam enemy communications, I require an Eb/No greater than 10 dB. 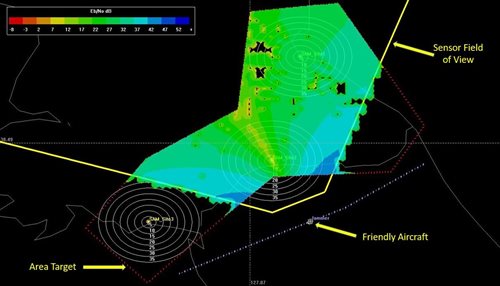 The black holes in the sensor’s field of view are areas that my jammer can’t touch due to terrain (thanks TIREM). During a crew briefing, I can move my plane along its route and mission crew can “visualize” where the aircraft is located and how effective its signal is in the designated target area. For those that want specific times and associated data, I can show them a Grid Stats Over Time report that specifies Minimum (dB), Maximum (dB), and Average (dB) down to the second if needed. AGI can train you in the basics of setting this up in a few hours. The “free” government two dimensional computer based tools I used took days to master. If it’s your butt on the line, which would you prefer?

The foundation for analyzing and visualizing complex systems in the context of their missions.