Don’t Have Consternation About Your GNSS Constellation:

The term Satellite Constellation is given to a group of man-made satellites that are placed in orbit, additionally this group of satellites work in unison to perform their collective mission. Each satellite is an independent and fully functioning satellite with full subsystems but designed to operate in a group. As an individual satellite, it cannot fulfill the entire mission because of many limitations.  These limitations could include its small field of view, its lack of visibility to its targets, its absence of worldwide coverage or its primary mission requires multiple satellites to accomplish.  When an individual satellite enters a constellation, the individual satellite helps to accomplish the mission that it could not do by itself. The whole constellation is greater than the sum of its parts.

One major example of Satellite Constellations is Navigation Satellite Systems.  These satellites are so widely used that without them many industries and modern day life would be greatly impacted suffer.  As a Global Traveler, if I lost the use of GPS, I would get lost and most likely never be seen again. See a BBC article about this subject.

Below are images of each unlabeled constellation. Reply below IF you can correctly name these constellation. (If you need help, download my STK Scenario here). 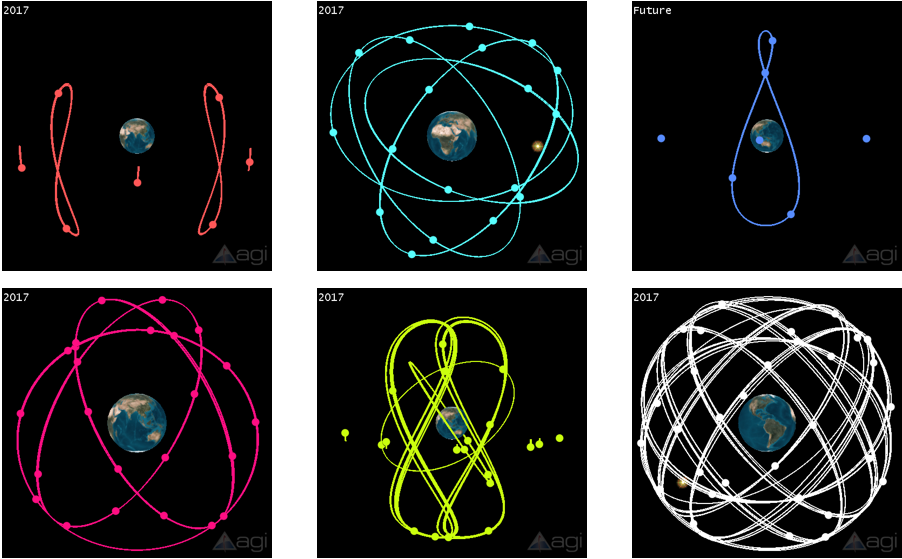 STK can model these current and future constellations. STK can model the Navigational Accuracy of all GNSS by calculating things like number of satellites visible to GDOP, PDOP, VDOP and all the other Dilution of Precisions. STK can analyze GNSS satellite coverage global, locally and over terrain. STK could analyzes the effect of GNSS jamming done intentionally or by accident using communications analysis. STK predicts the effects of buildings on the GNSS signals. Here are some awesome Training guides that will get you familiar with using GNSS Satellite Systems.