It's an urban warfare out there

U.S. combat units are deployed and fighting around the world. In this blog, I want to focus on company or smaller ground units that have fought or are going to fight in an urban environment. An obstacle of fighting in a town or city is terrain and urban terrain. According to Wikipedia, urban terrain is a military term for the representation of the urban environment within the context of urban warfare. Urban terrain includes buildings, roads, highways, ports, rails, airports, subways, and sewage lines.

The Army Field Manual 3-06.11, Appendix L, Communications During Urban Operations, states: The complexities of the urban environment such as line-of-sight restrictions, inherent fortifications provided by structures, limited intelligence, densely constructed areas, and the presence of noncombatants can restrict military technology. Let’s look at using STK to mission plan line-of-sight communications during urban warfare operations. Line-of-sight communications are the easiest and fastest way to get an immediate response when you need something done now. In a city, you’re dealing with some line-of-sight problems such as structures and terrain. The Urban Propagation Extension for STK Communications provides very fast, site-specific, path loss predictions for communication links in urban environments.

Shapefiles and Terrain are the key. In my scenario, I’m using a STK Terrain File (pdtt). This particular terrain file is unique in that it can be used both visually (3D Graphics window) and analytically. You can convert any terrain file used by STK into a PDTT. The shapefiles for STK Urban Propagation Extension must have polygon features to represent building footprints and an elevation attribute to represent elevations of the buildings. The following image shows both the terrain and prebuilt shapefiles that mimic the actual buildings in the combat zone. 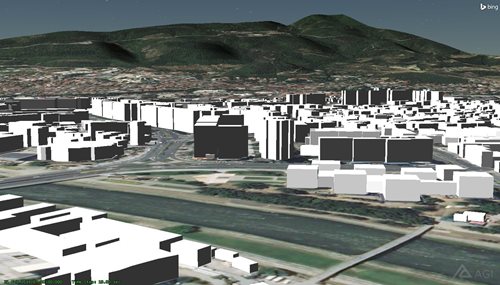 Using an Area Target object, I surround the portion of the city in which combat and/or reconnaissance will take place. I determine where the command post or any unit that will be in direct communications with subordinate platoons, patrols, etc. will be, and insert a Place object at that location.

Based on the location of the command post, I’m looking for dead spots in the operations area where radio operators won’t be able to receive transmissions. Conversely, I could determine whether or not a hand held transmitter would be able to reach the command post. I will attach a Transmitter object to the command post. I use a second Place object as a parent object on which I’ll attach a Receiver object. The second Place object acts as a potential location of a radio operator somewhere inside the city. The Transmitter and Receiver objects are built to the specifications of the actual communications hardware. Insert a Coverage Definition object. Set it to use the Area Target for the grid area of interest and set the point granularity to as small as you require. Think of the points as being possible locations of a platoon receiver. By setting the Receiver object as the grid constraint and the Transmitter object as the asset, you can compute accesses to each point in the grid.

For this analysis, focus on Link Margin. Based on voice communications and the specifications of the equipment, use a Carrier to Noise ratio (C/N) Link Margin of 10 decibels (dB) as a cutoff. The analysis shows minimum and maximum values as being minimum (dB) -2863.6102 and maximum (dB) 84.4697. Any value below 10 dB is bad, so create contours that show various colors corresponding to decibel levels between 10 dB and 80 dB. When visualizing this in the 3D Graphics window, any areas in the city not showing any color are areas where radio operators will not receive intelligible communications from the command post. 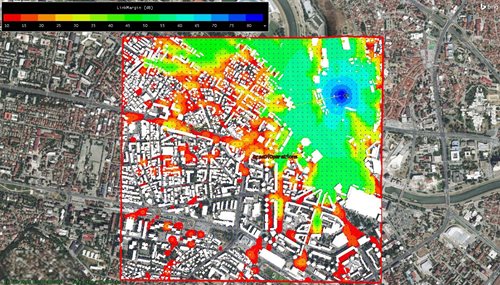 More technical information concerning STK Urban Propagation Extension for Communications can be found at Fidelity at High Speed: Wireless Insite ® Real Time Module™. The actual step-by-step instructions on how to set up a similar scenario can be found in the tutorial “Modeling Propagation Loss in an Urban Environment”.

Analyze and visualize your system performance anywhere in your coverage grid.