System Tool Kit’s (STK)’s Radar module development started in 1997 with a need to assess radar system performance under highly dynamic scenarios for air, space and surface-based objects. The dynamics of a scenario dictate the changing geometries (such as positions, velocities, accelerations and attitudes) of the radar object platforms as well as the targets of interest. The basic concept was to exploit the power of STK’s geometry modeling, attitude, object propagation and figures of merit computation engines and analyze the operational suitability of a radar system for an intended mission. Radar is fully integrated with STK and utilizes all of its capabilities, including area and object track coverage analysis and figure of merit constraints and graphics. Radar supports Search/Track and spot SAR modes of operation. This blog reviews the Search/Track mode. A radar object may be attached to any STK platform object, such as a facility, aircraft, launch vehicle or a spacecraft, as well as any location on the platform. The orientation of antenna can be assigned. Parent objects’ position and attitude determine the ultimate position and the orientation of the radar antenna. However, the location and the orientation of the radar antenna are fixed with respect to the parent object body axis. STK scenarios use a Sensor object to model antenna dynamics. The Sensor object is used as a pointing platform (or a gimbal) for the radar antenna. The Sensor object has several modes, which are highly useful for radar system models. The notable modes are spinning or tracking. In the example below, we are using a sensor to model a spinning radar antenna. In this scenario, the Radar site is a Facility object. A Sensor object is attached to the facility to be used as a spinning platform. The following figures show the settings for the Sensor Definition and the Sensor Pointing. 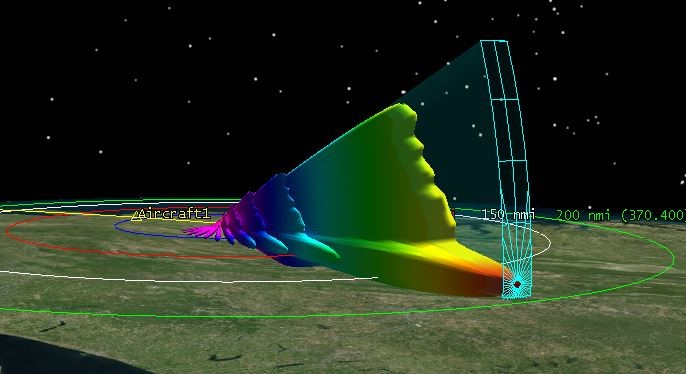 This spinning radar is used to scan the space around the radar. The radar basic constraint Field of View should be checked to limit the access visibility to within the radar azimuth resolution. A fast-moving aircraft (or a missile) is approaching at the speed of 1 km/sec. Carry out the radar performance analysis by doing an Access from the radar object to the aircraft by using Search/Track report. The graph in figure 4 shows the radar hits on the target and the radar performance in tracking the target.

As the radar is spinning at 5 rpm, we get a sample every 12 seconds. Even though radar is performing as expected, we have little confidence about the performance between the samples. A simple solution is to conduct the analysis by tracking the target aircraft. The Sensor object supports object targeting mode. It is useful for similar analyses, however, keep in mind that targeting mode tracks the Sensor bore-sight locked to the target aircraft body axis origin point. Real radars while spinning in azimuth will keep the elevation fixed with respect to the horizon. The solution is to track the ground projection of the aircraft’s path. The Sensor object can be defined to do that. The Vector Geometry Tool (VGT) in STK Analysis Workbench is used to define two VGT objects on the Facility object (radar site). First, a vector from radar site to the aircraft is defined and then a radar axis is defined so that it is aligned with that vector. The settings are shown below: 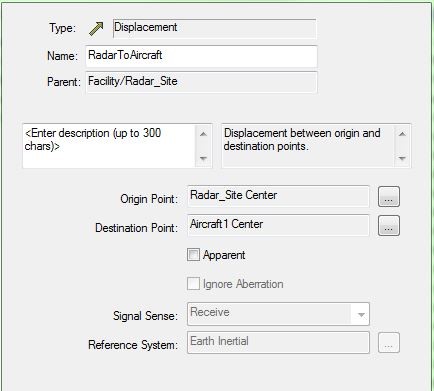 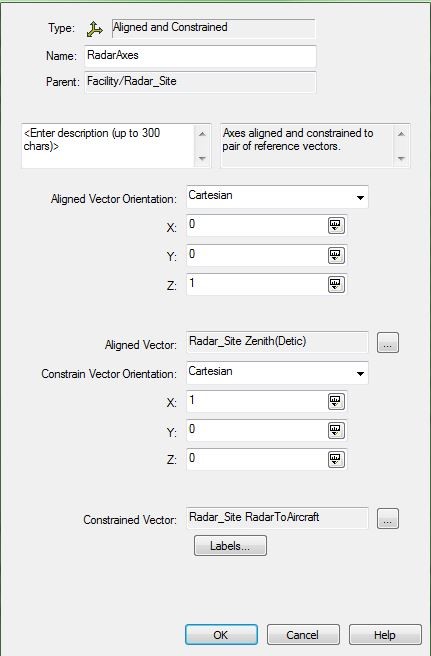 The Sensor pointing settings use the VGT-defined Radar Axis to keep the radar tracking the aircraft, while maintaining the Radar elevation setting at proper level. 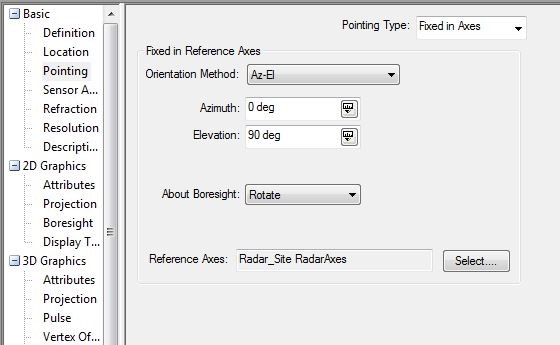 Now, the radar maintains the proper orientation while continuously tracking the target aircraft. Repeating the radar performance analysis by using the Search/Track report shows that the radar is able to perform well across the full range of the radar.

Just a small note regarding a sharp drop in the integrated SNR value from 5 to 10 nautical mile (nmi) range and a discontinuity at 25 nmi range are due to Sensitivity Time Control (STC) feature. The next entry in this radar series will look at the aspect-dependent Radar Cross Section (RCS) for targets. In the meantime, download STK 10.1 and evaluate STK Radar on your own, or send your questions or comments to stkradar@agi.com.