The morning of October 10, 2016 at about 7:27 am EDT I was driving towards AGI’s headquarters office in Exton, PA when I spotted a UFO. I was eastbound on US Route 30 Bypass, between the Airport Rd and Manor Rd exits. Visibility was excellent. Out of nowhere, directly above the road in front of me, there was a very bright object far in the distance. I watched it intently for a few seconds and then it vanished without a trace. My first thought was that this was a sun glint off an airplane as I had already caught a few of those on this sunny morning. But I didn’t see even the faintest speck of aircraft, before or after the bright flash – not. What on earth did I just see?!?

My thoughts immediately jumped not to space aliens, but to that much more explicable phenomenon of satellite flares. Satellite flares happen when the sunlight reflects just right off of an object in space to an observer and temporarily creates a very bright object in the sky. The most common of these are Iridium flares, which can even be seen during the daylight in the right conditions. Had I just caught an Iridium flare on accident? Or from some other object? I turned to STK to investigate!

First, I needed to recreate the time and location of my observation. I had noted the time on my dashboard clock (7:27am) and added 2 minutes on either side since it wasn’t well synchronized to a standard time reference. Getting my location correct was easy enough using streaming bing maps, STK Terrain Server, and 3D object editing. All I had to do was turn on Hybrid maps and look for the long, straight stretch of road between those two exits. 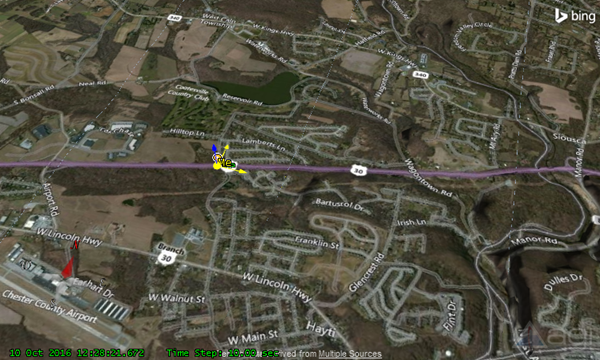 Next, I needed to restrict the part of the sky this object was in and how it was moving. I represented my direction and field of view and using a sensor object. I had taken a mental note that the bright object was about 1-2 fists above the horizon (or approximately 10 and 20 degrees), at a similar elevation to the Sun. Half of that gives me the Elevation for my sensor pointing. It was directly in line with the pavement in front of me, so found an Azimuth value that lined up. I set my sensor FOV to cover a reasonably large area (20 x 14 deg) since the uncertainty on my azimuth and elevation “measurements” was rather high. Additionally, I could tell that the object was moving left to right in an almost horizontal direction, so I added Access Constraints to my Sensor for a minimum Azimuth Rate of 0 deg/sec and an Elevation Rate between -0.05 and 0.05 deg/sec (under Sensor Properties – Constraints – Basic). Finally I set a Maximum Range constraint of 10,000km to exclude MEOs and GEOs. 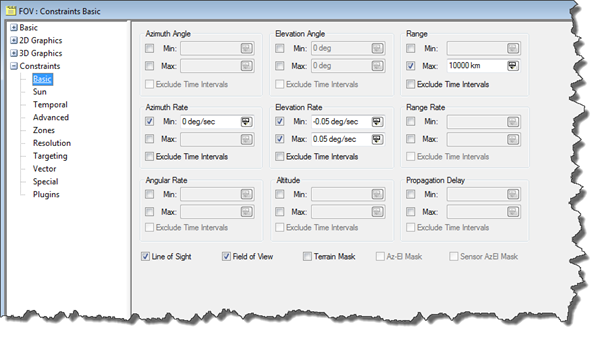 The next critical step in my analysis was to use STK’s Deck Access tool (check out the Help) to compute visibility from my sensor to the entire satellite catalog at once. This is an extremely useful and efficient tool for answering just this kind of question: Of thousands of possible objects, what can I see or what can see me? It was recently enhanced in STK 11.1 to make use of parallel processing and runs faster than ever. To make sure my analysis was as accurate as possible, I downloaded the whole satellite catalog for October 10 from AGI’s online archives, accessible from the Resources - Supporting Data page. 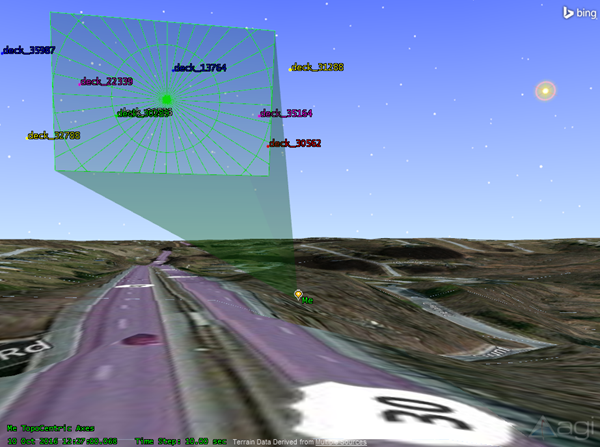 The results are presented in the table below. The Name and Status data come from AGI’s Standard Object Database, while the Dimensions are from some quick internet searches.

So, how to narrow down this list? The main factors involved in the apparent brightness of a satellite are:

It turns out that for satellite glints, the most important – and usually least well known – factor is often the orientation. Take Iridium flares for example. These are highly predictable only because the older Iridium satellites have large, reflective antennas mounted at a fixed angle to the satellite and the satellites are flown in known orientation, and can be accurately modeled and predicted in STK with the help of the Vector Geometry Tool. For other objects, various components could be just as reflective, but if they are tumbling or if their orientation is unknown, it will be nearly impossible to predict a glint.

To narrow down the candidates for my event, I assumed that the “Debris” objects are likely too small and uncontrolled to produce a visible glint. The only Active object, AAUSAT-II, is a cubesat (10cm across). Web searches suggest Cosmos 1432 is approximately spherical. The two Rocket Bodies are probably generally cylindrical and, like the fuselage of an aircraft, may produce a visible glint. However, the reflection is spread out over a larger angle and you generally need to be much closer to see it. A flat surface is more likely to produce a glint visible from space. The only other candidate on the list is the POLAR BEAR satellite. Although no longer operational, it was gravity gradient stabilized and its 4 solar panels may potentially still be in a somewhat stable orientation.

Following some analysis pioneered by our own Dr. T.S. Kelso, I used the Vector Geometry Tool to create the reflectance vector (purple) and reflecting plane (yellow) required to allow me to see a glint from POLAR BEAR. The arrangement looks plausible, so that’s my best guess. 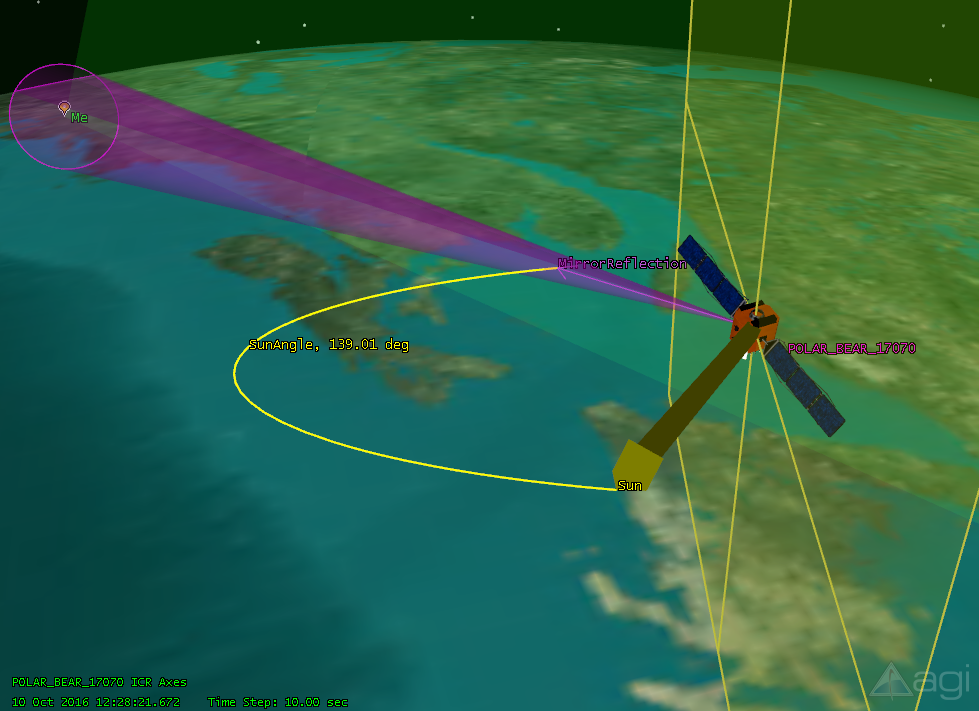 Unless it was swamp gas reflecting off the planet Venus… but I checked and Venus was below the horizon. 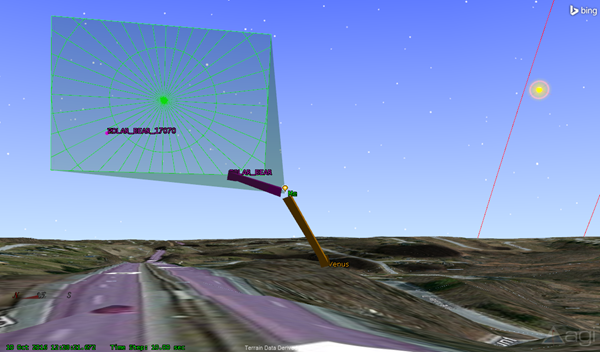 The foundation for analyzing and visualizing complex systems in the context of their missions.