Zoom in to the Field of View

In STK, camera paths work best when the camera remains focused on a single object. However, there are times when you need to shift focus to another object within a single camera path. Have you ever wondered how to do this? I have a FAQ and example scenario that will show you a camera path that follows a satellite, zooms down to the Earth to scan an area target, and then zooms back out to the satellite. In order to understand what you’re doing, it’s important to understand field of view and zooming in STK.

It is useful to think about Field of View as the inverse of magnification. As the Field of View increases, magnification decreases. You can see more, but what you are seeing is smaller. Lowering the field of view shows less, but what you actually see is larger. Look at the images below. The image on the left has a larger field of view, showing you more, but it’s much smaller than what you see in the image on the right with a lower field of view. 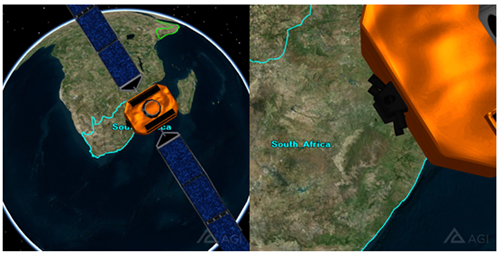 Field of View is a stored property of a camera path. Most of the time it stays the same throughout a camera path, but it can change from one keyframe to another. Changing field of view is a way of making it look like the camera has moved, without actually moving the camera. In most cases, it’s much easier to just drag your mouse and zoom in. We can’t do that in this scenario.

If you take a look at my example scenario, you’ll see one camera path. The key to creating a clean Field of View zoom is the use of straight lines. You need to provide a clear path for the camera to zoom and in this case, the easiest way is to adjust the view through the use of keyframes. Between the first and second keyframes, I shift the image so that the satellite moves to the other side of the screen.
In a previous blog I showed you how two identical keyframes, separated by a very short interval will break a spline. I used this approach in this example. Without moving the camera, I advance the clock by 30 seconds, change the FOV to 10 degrees, and use the mouse to position the camera exactly where I want it. I create a new keyframe, modify the time step, and add a new identical keyframe.

It looks like the camera has moved closer to the Earth but it’s actually following a path behind and slightly to the left of the satellite. I then reposition my camera and repeat this process for the next couple of keyframes. And finally, 30 seconds later, I return to my satellite by changing my field of view back to 75 degrees, repositioning the camera, and adding a final keyframe. The end result is below.