We have just released a new version of STK Engine on Linux: v11.0.0! This release is the first Linux release in the 11.x series.

The most significant Linux-specific news for this release is 64-bit support (in addition to 32-bit that was previously supported). This means that you can now develop Java applications on Linux using a 64-bit JDK. Those applications can manipulate larger datasets, and perform memory intensive computations that would run out of memory with the 32-bit version. An added benefit to the 64-bit support is ease of install. With 64-bit prevalence in the latest Linux distributions, all the prerequisites are (usually) already available in the base operating system file set. On Ubuntu 14.04 and Redhat/Centos 6/7 with a JDK already installed, you can just untar our packages locally and get up and running without admin privileges. This also makes deploying your engine application on Linux very straightforward. You can just embed our libraries and their accompanying data files into your application directory structure, and then point to those locations at runtime. Another feature now available on Linux with this new version is support for the 3D Graphics Analysis Tools. These four tools include the Area Tool, the AzEl Mask Tool, and the Solar Panel Tool. These tools use the GPU to render elements of the 3D scene, and then perform computations on the resulting projected images.

Regarding the product roadmap, one of our goals is to make STK Engine on Linux better fitted for use on a compute node (in addition to the current desktop use case). 64-bit support is an important step in that direction. Another friction point for that use case is the Xlib/OpenGL dependencies (even when using engine for computations only, without displaying any graphics). While there are workarounds available today (Xvfb), we are working on adding a “No Graphics”/headless option that will turn off that dependency and greatly facilitate this scenario out of the box. 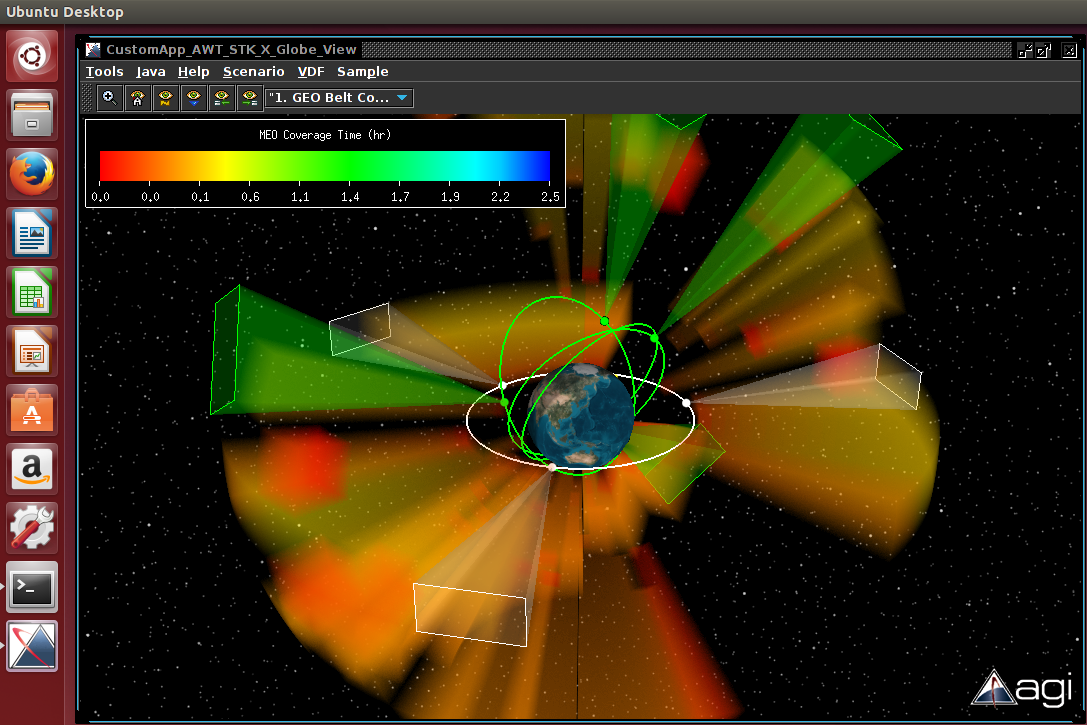 This release also demonstrates an accelerated time line for our Linux offering. In the past the Linux releases were lagging behind the corresponding Windows versions by a long period of time (sometimes more than a year). With this release, the Linux availability is just four months behind Windows. And thanks to our efforts to streamline our Linux development process (by eliminating third party dependencies that decreased our agility), we expect Windows and Linux updates to be even closer in the future. Last but not least, this release also includes capabilities that were introduced in our Windows version for STK11: object model support for STK Communications and Radar, streaming terrain for both analysis and visualization, new Volumetrics functionality that combines the flexibility of Analysis Workbench with the spatial analysis capabilities of Coverage, Phased Array antenna mode for Communications and Radar, and Aviator/Aviator Pro products, which are the next generation of Mission Modeler. For more information on the STK 11 new features, see New Features in STK 11. So give it a try and let us know how it works for you! Download the software from Product Explorer, request a demo license, bring up your favorite development environment, and start coding! More information about this product can be found on STK Engine Product page and in the STK Engine for UNIX Help System.