What Will the 2017 Solar Eclipse Look Like for You?

I was really excited when my colleague told me that the North American Solar Eclipse, taking place on August 21st, will pass over my hometown near St. Louis, MO (Thanks Kent!). You can see the track of where the Total Eclipse will be visible on this awesome Cesium-based eclipse viewer. 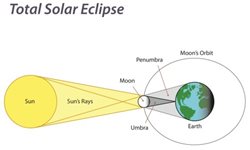 When the moon passes between the Earth and the Sun, all sorts of things happen. The sun gets blocked from places on Earth, but it also gets blocked to satellites orbiting the Earth which can wreak havoc on solar-powered satellites. This is one of the reasons STK includes a “Solar Intensity” calculation as well as Penumbra and Umbra lighting conditions for satellites as part of our 40,000+ analysis calculations.

Anyway, I was interested to see what would be the perfect spot to see this historic event from an iconic landmark, the St. Louis Gateway Arch. To do this I quickly searched for a 3D model of the St Louis Arch, which I Imported to STK in an open-standard COLLADA format.

Next, I created an “eclipse viewer” place near the Arch and set the “view direction” to be looking up at the sun in a new 3D window. To find the time of the eclipse from that location, I quickly created an angle between the sun and moon and identified the minimum value on August 21, 2017. From there, I moved my “eclipse viewer” place around various locations near the Arch until I found a view of the eclipse that also had some elements of the arch in view. Then to get fancy, I plotted the “Solar Intensity” calculated values on the Earth’s Surface to show a shadow effect.

Finally, I recorded a video of my scenario to share with you! Everything I did you can learn from our free Level 1 and Level 2 STK Training courses available online or in person. You can also download the STK Scenario from the STK Data Federate (Basic or with shadow)(username: "anonymous", pwd: <none>) so see what the eclipse will look like to you, but remember to always follow eye safety guidelines if you go to look for yourself!