Ringing in the New (Horizons) Year: NASA mission gets close and comfy with far-away space object

The real party on New Year’s Eve took place at Johns Hopkins University Applied Physics Laboratory (APL) with high profile guests Southwest Research Institute (SwRI) and NASA. And while ringing in 2019 was exciting, the coolest part was no doubt one of the first amazing feats of the new year: The New Horizons flyby of Arrokoth at 12:33 AM.

Back in 2015, New Horizons nailed its flyby of Pluto and it took some pretty astonishing photos. Three and a half years later, it flawlessly performed its next trick, flying three times closer to Arrokoth than it did Pluto. So why is this New York City-sized space rock important? 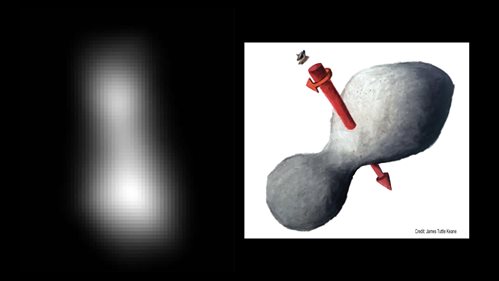 Per APL: At left is a composite of two images taken by New Horizons' high-resolution Long-Range Reconnaissance Imager (LORRI), which provides the best indication of Arrokoth's size and shape so far. Preliminary measurements of this Kuiper Belt object suggest it is approximately 20 miles long by 10 miles wide (32 kilometers by 16 kilometers). An artist's impression at right illustrates one possible appearance of Arrokoth, based on the actual image at left. The direction of Arrokoth's spin axis is indicated by the arrows. Credits: NASA/JHUAPL/SwRI; sketch courtesy of James Tuttle Keane

Needless to say, the first moments of 2019 were out of this world for all of humanity. You can relive this historic day over and over again… at least I know I will. The bright minds of APL, SwRI, and NASA worked on New Horizons for almost 20 years, often using AGI’s Systems Tool Kit (STK) in truly innovative ways. For example:

To our amazing customers on the New Horizons mission, congratulations and thank you for bringing us along on this journey! We can’t wait for what else 2019 has in store!