Earlier this month I presented a webinar titled Thermally Imaging Hard Targets from Space that I couldn’t be more proud of. We presented three very different types of hard problems including monitoring small satellites in the shadow of the earth, determining the right system parameters for detecting and navigating around wildfires, and our final example was tracking a hypersonic glider. For each of these scenarios I described the process I used to create the input data and generate the output results using AGI’s Systems Tool Kit (STK) with the electro-optical infrared (EOIR) plugin. You can see the entire webinar here if you’re interested, however I’ll describe one specific example that we’ll be showing in the upcoming Space and Defense Software Expo.

Maybe the most interesting problem right now is the question: What’s the best way to detect and track a hypersonic glider? My area of expertise is in remote sensing, specifically building and utilizing sensor systems that image objects in the visible through the thermal infrared spectrum. So for me I could build the sensor systems and process the output imagery, but I didn’t know what the inputs looked like. Thankfully that’s exactly what the Aviator plugin can do for STK. 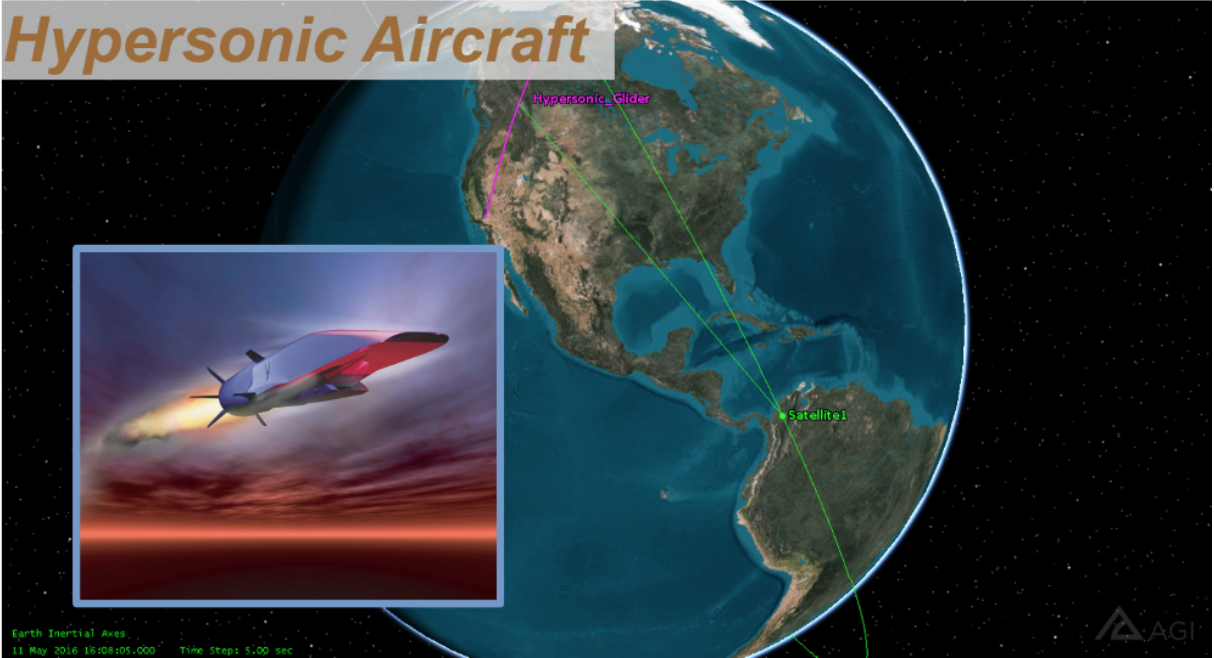 With Aviator I used an already built aircraft flying a route that bounced between Mach-4.5 and reached just above Mach-6. Then using the Leading Edge temperature calculation, which is a function of altitude and speed, I could then build up a simple 3D model of the hypersonic glider and put appropriate surface temperatures on the leading edge, exhaust, and other surfaces of the aircraft.

With the aircraft now flying an accurate route and a custom shape and thermal model determining the radiometric properties of the aircraft, I now had my target setup and could focus on the imaging system. The aircraft was flying a South-to-North route up the West Coast of the United States, so I chose to put a satellite in the default sun-synchronous Low Earth Orbit (LEO). I then directly targeted the aircraft with the sensor so I could generate target and background radiance values to analyze. Here are the results from that initial setup.

These results were a little surprising to me at first. Initially I didn’t realize that the signal would start at a peak and then drop down pretty steadily throughout the scenario. The second was the clear threshold when the target signal drops below the background signal. However, with STK it was easy to load up the scenario and jump to these different time steps to evaluate what exactly was going on. 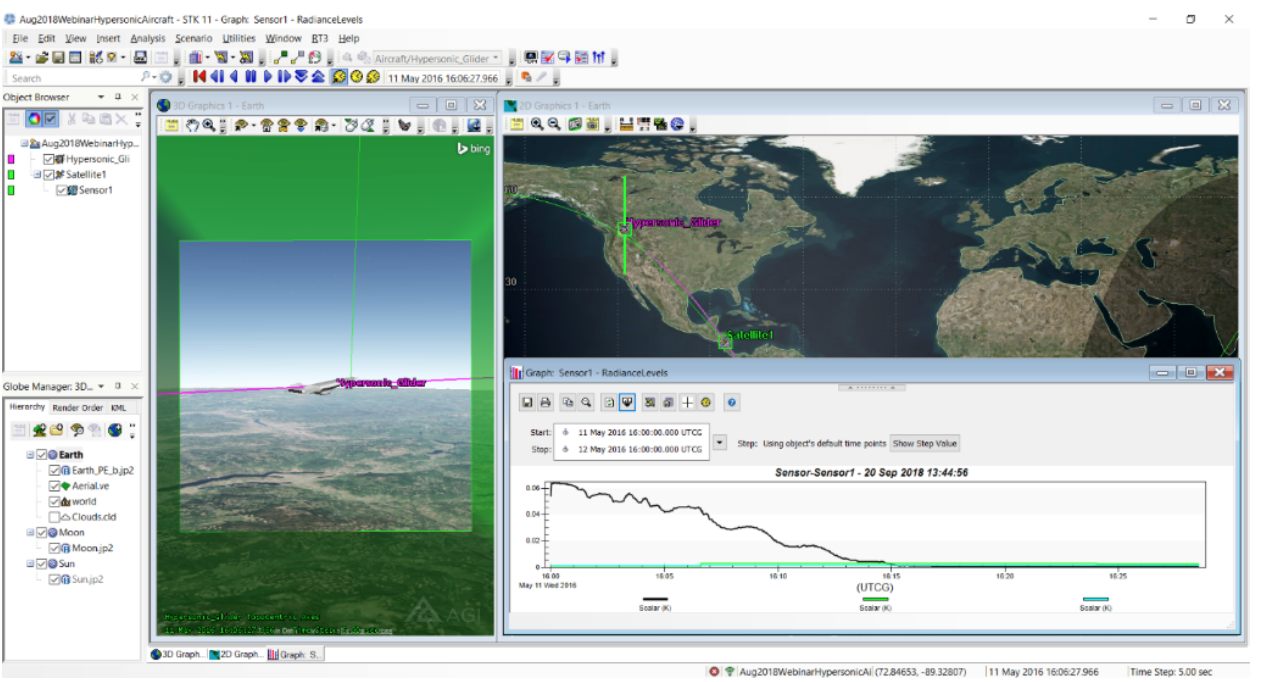 What we could see from the synchronized STK 3D window was that early on in the scenario we would actually be imaging underneath the aircraft and we had a direct view of the exhaust. Furthermore, because we were imaging at a grazing angle to the earth our background would actually be space until around 400 seconds into the scenario. Then as the scenario played out we saw more and more of the top surface of the aircraft, which was much cooler than the earth background, causing the target radiance signal to drop below the background radiance signal.

This piece of analysis could be extended a million different ways, adding variations to the flight characteristics, surface properties, sensor characteristics, imaging platform orbital parameters, atmospheric conditions, and background characteristics. All of these variations are straightforward with a fully functional modeling and simulation environment like STK, but determining the right parametric studies and learning from the phenomenology is something left for the domain experts who are studying these hard problems.

So if using modeling and simulation to solve hard problems is something of interest to you, coming up next month in October I'll be joining a bunch of other AGI engineers traveling around the country to show off how our latest release STK can be applied to your hard problems. I'll be going to Colorado Springs, Denver, Los Angeles, Colombia, MD and Chantilly, VA for the Space and Defense Software Expo. If you wanted to see how I created any of the examples from the webinar, have a new sensor design you would like to see in action, or have your own hard problems please stop by. 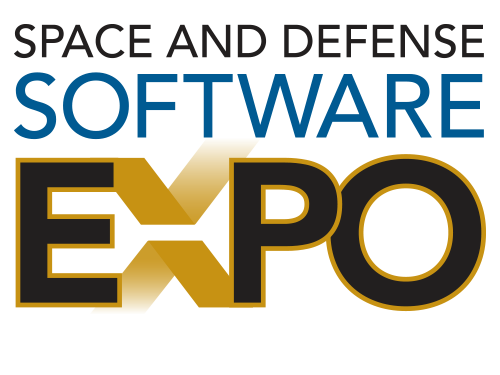 Don't be shy! If you have the time to visit one of these tour stops bring your tough problems. It would be awesome to work together. All three of the examples I showed in the webinar required more than just sensors: I needed help from systems engineers and other subject matter experts to generate thermal profiles, put my satellites in the right orbits, and properly fly an aircraft at hypersonic speeds. The Expo will have a Tech Zone with AGI subject matter experts in many different areas including astrodynamics, aerodynamics, communications, RADAR, and so on to help build integrated solutions on the spot.

With the right team, the right inputs, and the right tools solving hard problems is what we engineers love to do. My personal mission right now is to empower more smart and determined engineers, hopefully just like yourself, to be able to do sensor modeling and hard target analysis. So whether you're an image scientist, remote sensing expert, or just want to integrate sensor modeling into you're larger analysis please visit any of these stops and hopefully I can show you something that can help you solve your hard problems.

Sign up to attend the Space and Defense Software Expo, where you can come meet our expert developers, attend our most relevant hands-on training courses, learn about our new enterprise and space situational awareness products, and network with local colleagues. We hope to see you at one of the following locations (click to register):