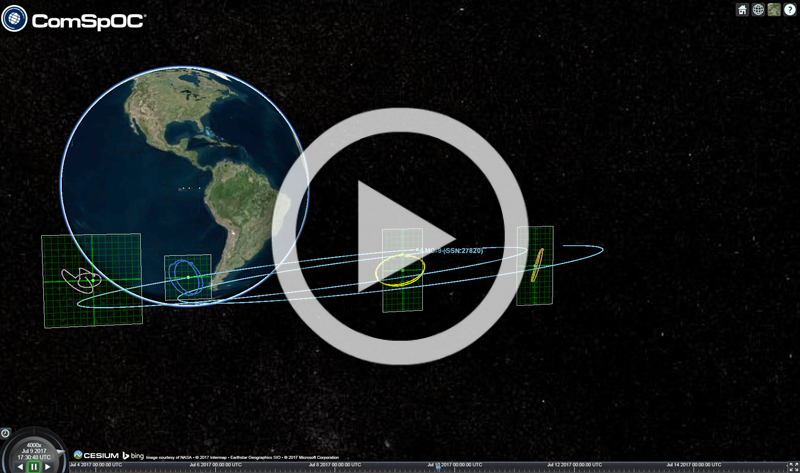 Stay up to date on the latest AMC-9 location:
Click, drag, zoom and pan through this interactive scenario.

Any anomaly in space operations can trigger uncontrolled,  potentially hazardous conditions and requires precision, speed and informed decision-making to resolve.  On June 17th, when the AMC-9 satellite first became unresponsive, SES immediately reached out to AGI’s Commercial Space Operation’s Center (COMSPOC) to obtain timely orbit information.   The nature of the anomaly was such that SES expected the orbit to be perturbed, but needed active ranging to confirm it.

COMSPOC quickly confirmed this and provided an orbit solution to SES. "The post-anomaly drift rate meant that within a day the spacecraft could be outside the beamwidth of our ground station antennas. The ephemeris from COMSPOC allowed us to ensure that antennas were pointing in the correct direction." commented Pascal Wauthier, SES SVP of Flight Operations. The COMSPOC ephemeris was also transferred to the Space Data Association's (SDA) Space Data Center to facilitate accurate conjunction assessment as the spacecraft passed by its immediate neighbors to the west.

SES regained telemetry of the craft on July 1st.  AMC-9 continues to drift west at approximately 0.2 deg/day with an apogee approximately 190 km above GEO, perigee 155 km below GEO, and a daily longitude variation of 1 degree in a stable and predictable orbit. We continue to monitor the orbit and attitude rates to identify conjunctions and facilitate further attitude and maneuver analysis as SES works with assistance from Thales on possible re-orbiting options for AMC-9.

"COMSPOC has brought to bear the core capabilities of highly accurate independent tracking and advanced maneuver processing in providing safety of flight and orbital data products from the beginning of the operation. We look forward to using these capabilities across our entire fleet as SDA upgrades the Space Data Center to be powered by COMSPOC." noted Chris Grogan, SVP of Customer Service Delivery at SES and Executive Director of the SDA

COMSPOC continues to support SES in their recovery of AMC-9.