With STK on your computer, you have the world at your fingertips, quite literally. You can model missions across the globe and even launch to neighboring planetary bodies, but what if you want to go somewhere in-between? Lagrangian points around the Sun-Earth-Moon or the Earth-Moon Systems are fascinating places for research missions. Take the James Webb Telescope as an example, it is set to launch to the SEM L2 position, orbiting in perpetual darkness so that it can take the best IR images. Various other missions take place at these Libration points, it’s only a matter of getting to them. 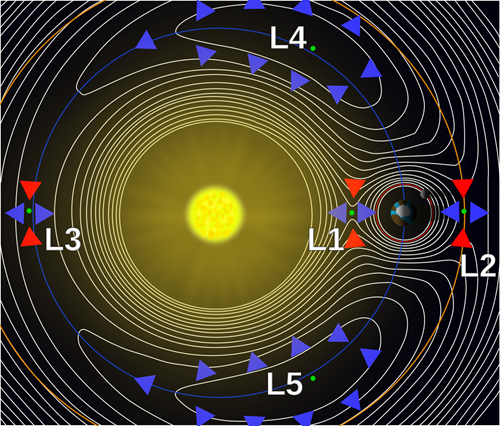 With STK, these missions are within reach. STK’s Analysis Workbench tool comes with many pre-installed set-ups so that you can launch to L1 or L2. Using Astrogator, you can model your launches from Earth to get to these locations.

However, what if you want to go to L3, L4, or L5? This is where Analysis Workbench shines.

Analysis Workbench allows you to quickly build your custom points, axes, and systems for different orbits. Using the Vector Geometry function you are able to build components for your specific launch. Take a look at the 3-step method for creating custom systems in STK.

Here we’ve built the L4 Libration point on the Moon-Primary Central Body. We can easily select which Libration point we want to use, similarly we can build this point for any planetary body in the solar system.

We bring it all together in this system. We use the previously defined Point and Axes to create this System. Using this system we can target the location for the satellites final orbit.

Once you’ve created your system, you can open up the Astrogator tool and begin the steps to launch there. If you’re interested in getting to one of the Libration points, then keep an eye on our upcoming training classes and materials. We’ll be posting the Launch to SE-L1 in the coming weeks!