How not to lose the first dog fight in space or...

We all know what a space battle looks like in science fiction movies. 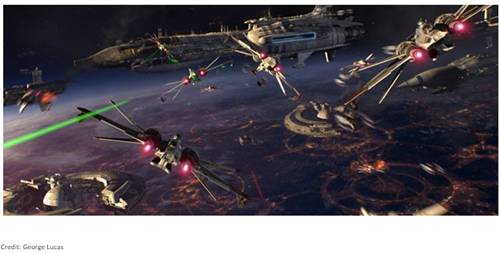 But what does a real space battle look like?  Even though we can only speculate at this point, we do know  that the warfighting challenges of space operators today and in the near future are just as serious and compelling as any air-to-air combat situation that you can imagine.

In fact, the first “dog fight in space” will be won or lost on the same principles that serve today’s fighter pilots - namely the Observe-Orient-Decide-Act (OODA) loop. This understanding of how to win a fight in the air was first detailed by fighter pilot, military strategist, and fellow Yellow Jacket, USAF Colonel John Boyd.

The same concepts equally apply to a conflict between satellites or missiles in a vacuum, although it will play out in a slower, disconnected, and less tangible way than for aircraft down in the soup.

Today’s spacecraft are operated remotely, like a fairly autonomous drone, which may not be in constant contact with the control station or operators. These vehicles do not all have on-board, autonomous navigation (GPS), nor do they typically have sensors intended to detect and respond to other objects in their immediate vicinity, such as onboard radar. Also, their operating environment, while vast, is very poorly and infrequently scanned for friend, foe, or noncombatant – at least compared to the airspaces of the world. This results in numerous potentially weak links in the OODA loop, which an adversary could exploit during a conflict.

Some of the more common technical questions we hear along these lines include:

One of the most frequent challenges operators and analysts have, often without even realizing it, are orbit determination (OD), maneuver detection, and characterization of space objects. These functions really provide the foundation for everything else in the OODA loop and are subject to the adage "garbage in, garbage out". Here "garbage" doesn't refer so much to the quality of raw data itself, but rather how utterly dependent later pieces of the OODA loop are on having a sufficiently accurate and timely assessment of the current state of all objects in the environment.

For example, people often ask us about improving their SSA picture by getting VCMs or SP data instead of just TLEs. They often fail to understand what assumptions are baked into the data that they are getting. They also don't appreciate that getting usefully accurate SSA data on an operationally relevant timeline is a lot more complex than they think – and it's never a good idea to accept someone else's solution without understanding its limitations.

For a more in-depth discussion, check out the following Tech Talk with one of our SSA experts, VP of Engineering Tom Johnson: