During recent years, low-thrust electric propulsion systems have been increasingly adopted as the  propulsion system of choice onboard many types of satellites. Unlike traditional chemical engines, which rely on energy released from the decomposition or combustion of propellant molecules, low thrust engines utilize energy from an external power source, typically solar power, to accelerate and eject charged particles at higher energies.

The higher momentum-transfer efficiency, or Specific Impulse, of low-thrust engines result in greater effective-payload-to-propellant ratio, or alternately, smaller launch costs for a given payload size, making them attractive for a variety of mission types. 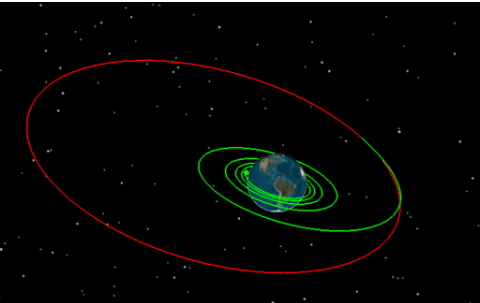 Aggressive investment by government and commercial entities into more advanced and increasingly powerful low-thrust propulsion technology is expected to continue and spur further growth in this sector.

For example, low-thrust engines typically result in rather long duration missions, during which the engines fire continuously, resulting in only small, gradual changes of the transfer orbit.

Additionally, depending upon the mission objective, it may be beneficial to operate the thrusters intermittently, causing discontinuities in the force model. Accurately modeling the physics and numerics of such behavior requires sophisticated mathematical formalisms to be built into your mission design and analysis tool.

What tool would this be? You guessed it, STK!

STK’s Astrogator provides the solution to trajectory design in these complex situations. In Astrogator, you have the ability to model a variety of low (and high) thrust engine models. You are able to leverage built-in engine models or customize, using your own. The method to generate these trajectories may involve the use of a traditional differential corrector or, since STK 11.3, numerical optimizers (SNOPT or IPOPT).

New to the repertoire of calculation capabilities is the collocation-based low thrust optimization capability, added in STK 11.5. Now, it is well known in relevant circles that a collocation method requires a decent initial approximation to the very trajectory you would like! Sounds complicated, but do not worry, STK makes your workflow painless. STK allows you to easily create an initial guess trajectory, which you can then use to “converge” on your desired solution under arbitrarily high fidelity force models.

Have your own externally generated initial guess? No problem, STK accepts your approximation, uploaded on the click of a single button!

Using STK Astrogator, model your low thrust optimal orbits all within one integrated tool. Watch the video and check out the links below for more information.