What is the Number of Encounters Assessment Tool? It's NEAT.

But everyone wonders what portion of these applications are “real,” actually leading to operational spacecraft, and what will that realized population mean for Space Situational Awareness (SSA), Space Traffic Coordination and Management (STCM), and collision risk?

There is no doubt that large constellations will have — and in fact already have — a dramatic impact on SSA and STCM. Within ten years, we can expect up to 2.5 million close calls per year in the most congested orbital regimes, resulting in over 40 collisions per year if these threats are not effectively managed and mitigated.

What is the NEAT tool?

The Number of Encounters Assessment Tool[i] (NEAT) is a fast, probability-based algorithm that assesses the long-term encounter rate between all pairs of satellites. Here, the term “encounter” denotes any kind of close approach event. You can make the encounter represent a hard-body collision, a maneuver, or a warning by specifying the miss distance of interest. This algorithm works by defining a path-centered ring torus about a second satellite’s orbit and assessing if the first satellite’s orbit penetrates this torus. The green arrows show the first satellite’s range of true anomaly for a specific orbital position of the second satellite. 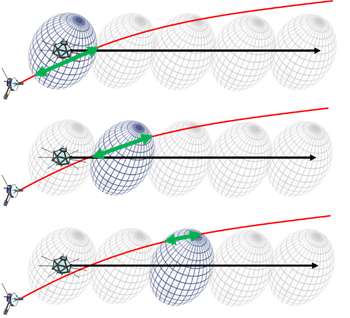 The algorithm assumes that the position of each object is uniformly distributed in mean anomaly along its orbit to determine the probability of both objects being within the distance you have specified. It is suitable for all circular, elliptical, and relatively-inclined orbits. This method was effectively used to assess the impact of proposed constellations on encounter rates.[ii]

Where is the NEAT tool located?

You can obtain a publicly accessible, freely available version of the NEAT tool, limited to circular orbits of the satellite(s) of interest, at https://comspoc.com/neat/.