The SNOPT and IPOPT search profiles have been constructed consistently with the existing Astrogator targeting paradigm. Users select controls in the usual way, and these controls become decision variables for the optimizer. Results, in the form of existing or user-defined calculation objects, are added throughout the target sequence and these may be configured as elements of the objective function or as constraints on the problem. Other Astrogator search profiles may be chained together with the optimizers to better solve the trajectory optimization problem. For example, a trajectory designer might begin with a differential corrector profile to move the solution into a feasible region. Then she could follow the differential corrector with an SNOPT or IPOPT profile to find a local optimal solution in the neighborhood of the previously identified feasible solution. Interactive user iteration and adjustment of the problem allows for the designer to massage a solution into successively better forms. Further, the process may be automated with scripting tool profiles.

Of the two search profiles, SNOPT implements a mathematical programming technique called sequential quadratic programming, whereas IPOPT utilizes the interior-point method. Both are large-scale, industry standard, local optimization solvers. A few common options for these tools are made available directly in the Astrogator user interface, and means are provided to supply input files with power-user level control for each of the underlying tool’s myriad of options. Familiar users of the optimization tools will realize the power and ability to tailor their strategies as desired, while less-familiar users will be able to leverage the new profiles without necessarily requiring an extensive knowledge of the underlying optimization tools.

Both the SNOPT and IPOPT software libraries are implemented within Astrogator in such a way that continued development and feature enhancements for the associated search profiles are within the control of AGI developers. Consequently, greater responsiveness is afforded for users of these tools. Additionally, the software libraries are licensed in such a way that future applications within Astrogator are possible. While these new search profiles inherently offer more flexibility for achieving mission goals, they also serve as a reflection of our ongoing efforts to improve and enhance Astrogator’s capabilities and a sign of things to come. Screenshots from two examples using the new profiles follow. 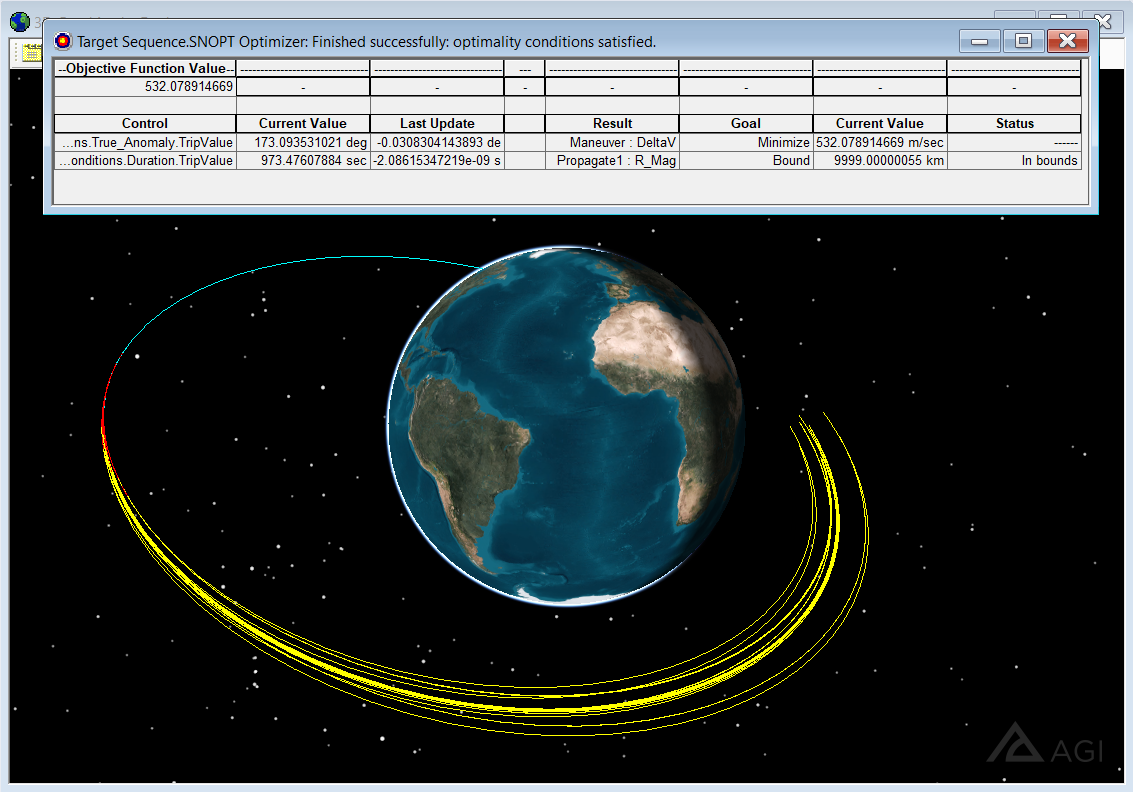 Finding the optimal true anomaly for a finite burn

Three successive maneuvers at apogee to circularize at GEO