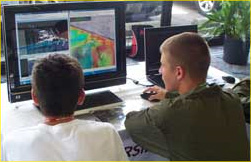 AGI business partner Riverside Research is doing its part for Science, Technology, Engineering and Mathematics (STEM) outreach by introducing its new electronic textbooks (eTexts) at summer camps for middle schoolers. The e-Texts, "Remote Sensing: A View Through Mechanical Eyes" and "Geodesy: The Dynamic Earth" were used as part of the curriculum at the annual Air Camp in Dayton, OH, a hands-on learning summer camp to engage students in the wonders of flight, aviation and aeronautics, right in its birthplace. Through the e-Texts, 80 campers were able to explore remote sensing fundamentals such as sensor field-of-view/field-of-regard, sensor platforms and sensor operating modes such as staring and sweeping. The eTexts also allowed the students to explore some basic concepts of cartography. AGI's STK Viewer software is incorporated into each chapter, allowing the students to study planet locations, examine terrain on the Moon and perform UAV mission planning and orbit analysis of the International Space Station (ISS). The students were even able to determine the actual dates and times the ISS orbited over the Dayton region during each Air Camp session. Riverside Research also brought its e-Texts to a half-day outreach program at the 2011 Chaminade Julienne STEMM Gateway Academy Summer Camp, also in Dayton, OH. Said Todd Simpson, of Riverside Research's Modeling and Application Development Laboratory (MAD Lab), “The students were very enthusiastic about using