June 18, 2020 – AGI and the Commercial Space Operations Center (ComSpOC), a wholly owned subsidiary, were honored to host U.S. Secretary of Commerce Wilbur Ross and U.S. Representative Chrissy Houlahan at our headquarters. During a roundtable discussion, our guests spoke of the importance of the country’s commercial space industry and leveraging private-public partnerships. We applaud their commitment to the space sector and thank them for engaging with us about the best way to solve the challenges of space traffic management (STM). 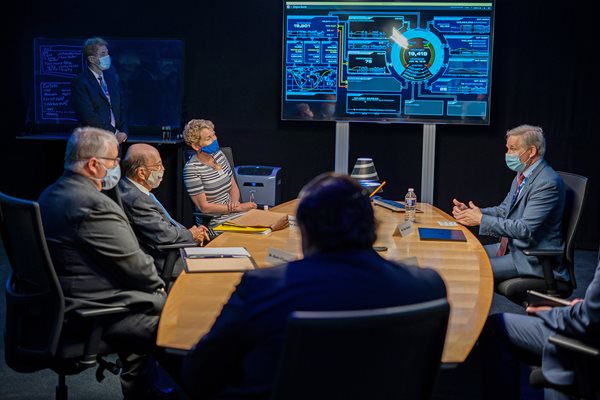 Following his tour of ComSpOC, Secretary Ross said in a recent interview with SpaceNews, “What they (AGI/ComSpOC) seem to have been able to accomplish is much more precise of tracking of objects.”

The mission of space traffic management

The visit by Secretary Ross and Representative Houlahan coincided with the second anniversary of the release of Space Policy Directive 3 (SPD-3), which assigns the responsibility of civil STM to the Department of Commerce (DoC). Protecting the space operating environment is not only critical to the burgeoning space economy, but to the U.S. economy as a whole. The DoC recognizes that STM is essential to supporting the space infrastructure. Therefore, in accordance with SPD-3, the department plans to implement an Open Architecture Data Repository (OADR) for the “crowd-sourcing” of authoritative data and commercial space situational awareness (SSA)/STM services. This OADR will require advanced, data-agnostic ingestion, processing, and fusion capabilities to enable comprehensive, timely, and accurate STM for all satellite operators.

Today, there are 1,950 active satellites dedicated to a wide variety of missions that are meant to improve our lives, such as democratizing access to the internet and researching climate change. However, the majority of objects in space are inactive satellites or pieces of debris from past collisions — otherwise known as space junk. The public catalog tracks approximately 19,500 pieces of resident space objects. But there are 130 million space objects that are so small, they elude reliable tracking. Every one of these objects can threaten the operation of an active satellite. As the space economy grows, 57,000 satellites are planned for launch in the next 10 years. The conclusion is obvious — the problem of space traffic has become existential.

STM is the planning, coordination, and on-orbit synchronization of activities to enhance the safety, stability, and sustainability of operations in the space environment. Learn how the Space Safety Coalition promotes responsible space safety through the adoption of international standards.