Earlier this year, NASA selected two missions to explore what it called the “lost habitable world of Venus.” Named VERITAS and DAVINCI+, the missions are from JPL and Goddard, respectively, and are tasked with exploring the composition of the Venetian atmosphere and mapping the surface of the planet. The goal of the missions is to improve our understanding of how Venus developed into the unfathomably hot, hostile world it is today. This transformation is especially interesting to scientists since Venus shares so many similarities with our own planet.

Inspired by this effort, I created a complete mission in STK that roughly replicates a notional version of the DAVINCI+ mission. This mission will release a probe into the Venetian atmosphere, so it was crucial for the scenario to have an atmospheric and gravitational model for Venus that accurately affected the trajectory of the satellite once it was orbiting the planet. In addition, the scenario needed analyze the interplanetary RF environment with external, high-fidelity antenna patterns, evaluate potential launch windows, and compute maneuver magnitudes and times. Thankfully, STK is more than capable of achieving all the mission design milestones.

With STK’s Astrogator capability and the High-Precision Orbit Propagator (HPOP), STK enables you to create custom, high-fidelity numerical propagation models for most central bodies in our solar system. For this mission, I used the VenusGRAM atmospheric model released in 2005 by NASA with an HPOP gravity model for Venus to create a reentry trajectory for a theoretical atmospheric probe. 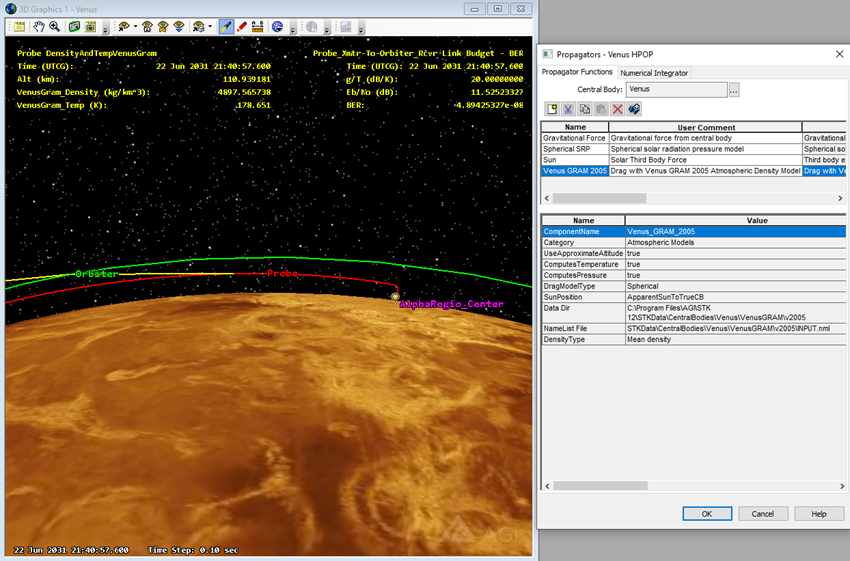 For the launch and injection portions of my mission, I used the Astrogator differential correctors to find theoretical launch times, required C3 energies, and the maneuvers needed to reach Venus based on a chosen launch time. Astrogator also enables you to target user-created vectors, which I used to perform B-plane targeting as the satellite approached Venus. It’s worth noting here that if I wanted to run many iterations of this mission to find optimal launch windows for minimizing Delta-V but increasing the proximity to the desired landing site for the probe, I could easily connect my scenario to ModelCenter. 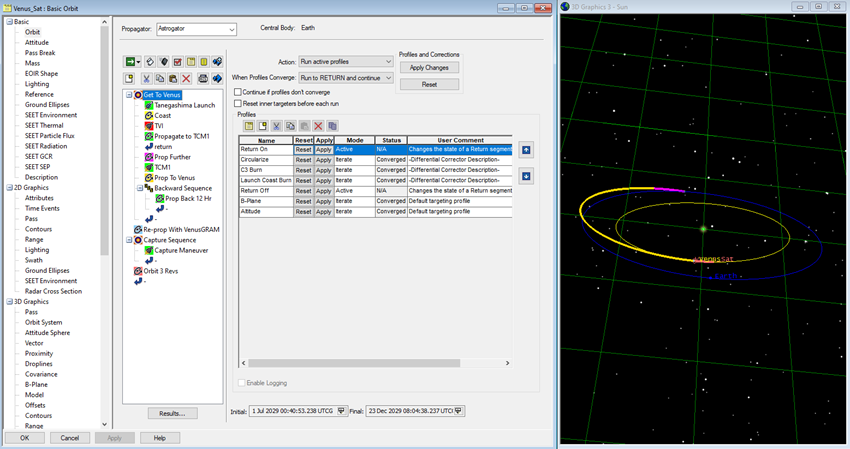 After my trajectory was finalized, I looked at my communications links between the probe and the orbiter and between the orbiter and my Deep Space Network ground stations. Using high-fidelity, far field data files from Ansys HFSS for a patch antenna on my probe and a parabolic antenna on my orbiter, I calculated link metrics across my entire mission. 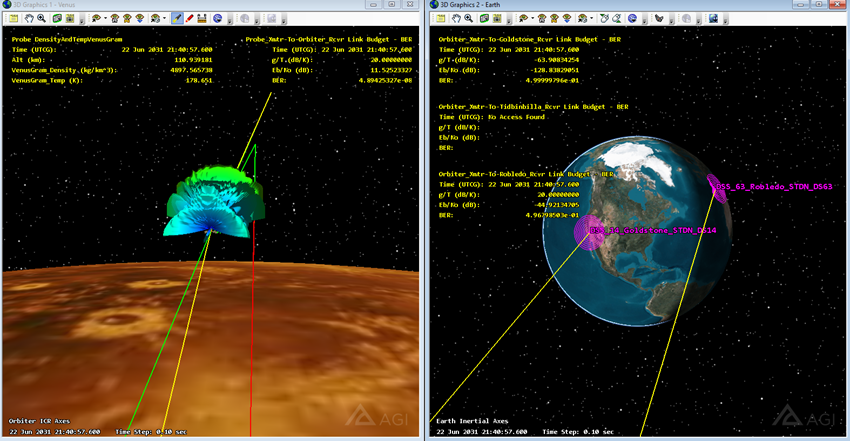 After this, I could model subsystems like the attitude control system or any electro optical sensors using STK’s SOLIS or EOIR capabilities. I could also schedule communication times from the ground using STK Scheduler, or simulate measurements in ODTK to analyze the on-orbit uncertainty for my specific trajectory. I could even add Venetian terrain and imagery to my scenario.

With all of these capabilities for interplanetary missions, STK is uniquely suited to support you in every phase of the engineering life cycle when planning and executing a mission to Venus.

Optimize task scheduling for any type of space system.